Amazon Prime Day has been delayed a bit for 2020 but that just means you can get an early start on your holiday shopping. And you know what’s on everyone’s wish list: NERF.

There are a ton of Nerf toys on sale this Prime Day and we’ve listed the best deals below along with a whole bunch more that you should check out.

This great deal on the best foam projectile shooters around is just for Amazon Prime members, so if you’re not a member, you’d better click that link. Then come back for some crazy cool deals on the best toys on the planet: Nerf.

Save $30 on the Nerf Rival Nemesis MXVII-10K 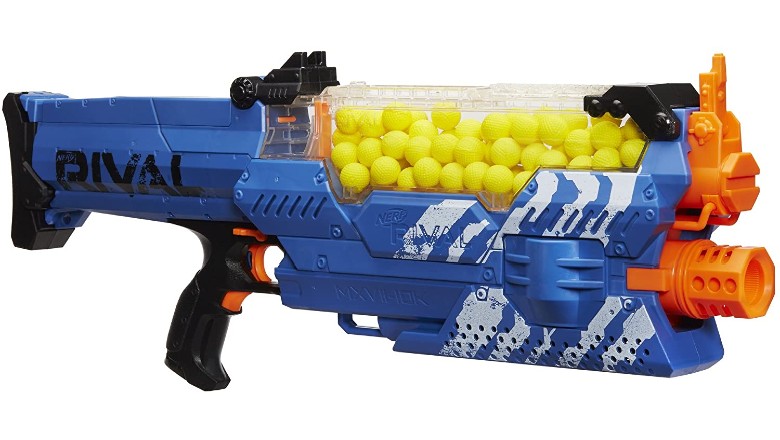 Are you ready for intense head-to-head competition? Then take a look at this little beauty: the Nerf Rival Nemesis MXVII-10K. It’s on sale for just $69.99 for Amazon Prime Day. That’s a savings of $30 over retail.

But tame that excitement because it’s going to take a steady hand to blast away the competition. Luckily for you, this bad boy packs 100 Nerf rounds in the easy-loading hopper. Just slide the hopper open and dump the rounds inside. The Nerf Rival Nemesis is available in red or blue but only the blue is on sale for Prime Day.

Did mention that it’s motorized as well? Yeah, no worries about frantically pulling the trigger. Just squeeze and blast away. Rapid-fire blasting at a velocity of 100 feet per second is a trip. Make sure and wear your safety goggles.

Save $30 on Nerf Rival Nemesis MXVII-10K 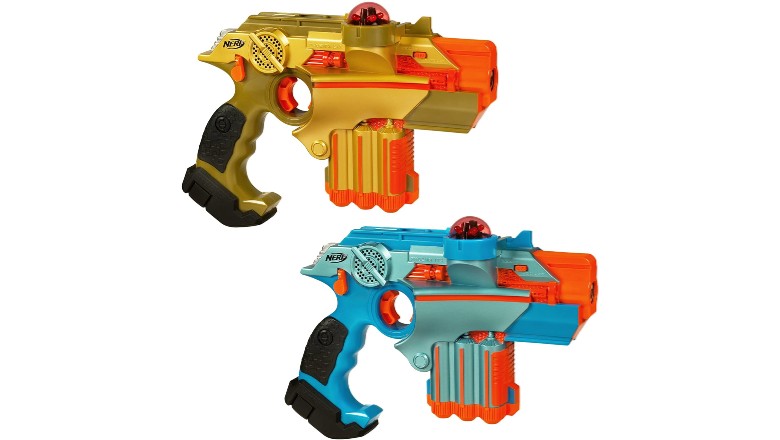 Mom is screaming at us to pick up the Nerf darts again. Maybe we should try Lazer Tag instead for a while? Hey, this Nerf Official Lazer Tag Phoenix LTX Tagger 2-Pack will do the trick! It’s a complete system that features two tag blasters using lasers instead of darts. No reloading and no clean-up necessary.

This pack of two blasters is available as part of this great Amazon Prime Day Deal for just $46.69. That’s 30% off for you. How great is that? At that price, pick up a couple; all Phoenix LTX blasters are compatible and interchangeable so more than two players can play at once. Imagine all the kids in the neighborhood playing at once.

Your arena can be anywhere, either inside the house or outside to create some crazy Star Wars type battles. The blasters let you know when you’ve been hit with lights, sounds, and vibrations. There’s even a recoil effect every time it’s fired with great shooting sounds.

Set your blasters to receive either 10 or 25 hits depending on skill level. Lights on the user side of the blaster feature strength and ammo indicators so you know how you’re doing during the battle. There are also team switches so that friendly fire is kept out of the game.

Save 30% on the Nerf Fortnite AR-Durrr Burger Motorized Blaster 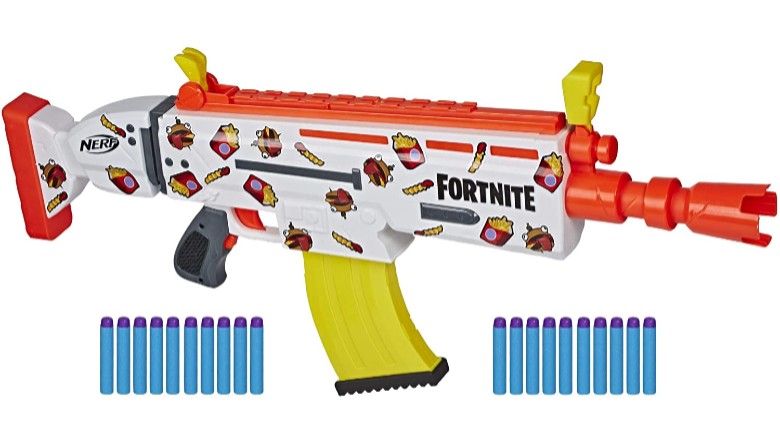 If you’re a fan of the Fortnite video game, then there’s more than a chance you’re a Nerf fan. Is there anyone that isn’t a Nerf fan? The Nerf Fortnite AR-DURRR Burger Blaster is inspired by the blaster used in the game. Take this baby home for just $34.99 during this Prime Day deal. 30% off? Yes, please.

Customize the blaster into a DURRR Burger Wrap with the included stickers, then take your Fortnite battles into real life with this blaster that features motorized action. Power up the motor with the acceleration button and pull the trigger to shoot a dart. The blaster comes with a ten-dart clip and twenty official Nerf Fortnite Elite darts. That’s more than enough to fully load the clip and give you ten backup darts for reloading.

Flip the 2 sights on the top of the blaster and align your shot. Be careful, now. Don’t spook your quarry. Official Nerf darts are tested and approved for performance and quality. They’re constructed of foam with flexible, hollow tips. Accept no substitutes!

Save 30% on the Nerf Fortnite BASR-R Bolt Action Blaster 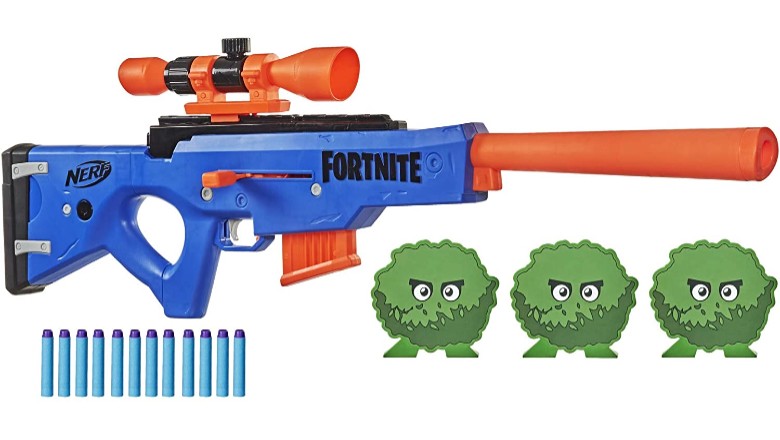 Here’s another blaster straight from the Fortnite universe. The Nerf Fortnite BASR-R blaster features bolt-action, clip-fed blasting, and comes with a removable six-dart clip and six official Nerf Elite darts. Save 30% during this Nerf Prime Day deal and take the BASR-R blaster home for just $27.99.

Three free-standing bush targets come with the blaster for aim practice or to compete in dart-blasting games. Gotta test your skills against opponents, right? The removable scope is invaluable for assistance to sight that target.

To start blasting, load six darts into the clip, pull the priming bolt back, then load the clip into the blaster. Push the bolt forward and gently squeeze the trigger to fire a dart. Move the bolt backward and forward to get another dart ready. Isn’t that simple?

Save 30% on the Nerf Zombie Ripchain Combat Blaster 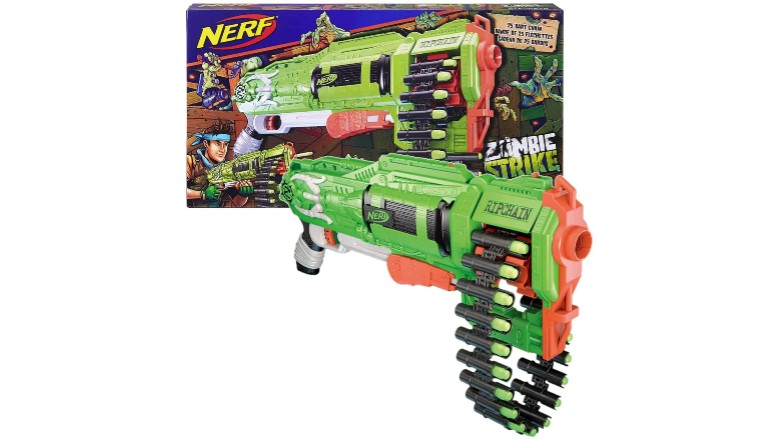 Halloween is coming soon so good thing you can get this Nerf Zombie Ripchain Combat Blaster in time to protect against the apocalypse. It’s on sale for Prime Day for just $27.99; that’s 30% off, cowboy. Just look at this monster, won’t you? You may not even have a zombie problem once they get a look at your new toy.

The Nerf Zombie Ripchain Combat Blaster features a 25-dart chain that gets placed on the barrel. Pump the handle to prime then pull the trigger. This beauty has the ability to fire one dart at a time (I admire your patience) or slam-fire all 25 darts quickly to drive that pack of ghouls back where they came from. Just hold down the trigger and keep pumping the handle.