Ashton Kutcher was hospitalized just two days before filming for his role as Steve Jobs after adopting the former Apple CEO’s frutarian diet. Fruitarianism is the practice of following a diet that consists mainly of fruits, nuts and seeds — a diet widely known to be practiced by Jobs. 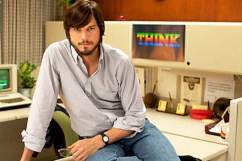 In order to prepare for his role in the biopic, jOBS, Kutcher switched to the all-fruit diet and claims that he ended up in the hospital for it.

“First of all, the fruitarian diet can lead to like severe issues,” Kutcher said. “I went to the hospital like two days before we started shooting the movie. I was like doubled over in pain. My pancreas levels were completely out of whack. It was really terrifying.”

Steve Jobs died of pancreatic cancer in in 2011.

However, there is no proof that an all-fruit diet leads to pancreatic cancer; a diet high in fruits and vegetables can can actually reduce the risk of the disease, but those who adopt a fruitarian diet are cautioned to make sure they get all their essential nutrients.

jOBS opens up in theaters on April 19.