So you didn’t sit down to watch a three hour award show of Hollywood schmoozing and now you’re worried about being out of the loop at the office water cooler? Not to worry, we’ve got you covered with all the highlights (okay, some of the highlights) from last night’s booze soaked celeb fest. All the excitement without the commercials and stupid acceptance speeches in cutting edge GIF form!

Tina and Amy brought the funny to the Golden Globes in a classy way.

Which lasted about 20 minutes and then turned into a sloppy drunken show.

Glen Close got hammered and proceeded to have a seizure.

Amy got boozed up and got her Clooney on.

It was a drunken party with lots of beautiful women, so of course Bill Clinton showed up. 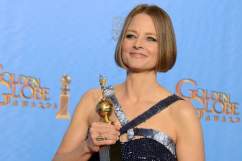 Will Ferrell had a hilarious presentation performance with Kristen Wiig.

Adele won song of the year for Skyfall.

Jodie Foster revealed that she’s a single lady… for the ladies.