Hollywood seems to be packed full of dysfunctional families, but the leading wackos aren’t usually twins. Enter the London twins, Jason and Jeremy. Jason only recently had his first public catastrophe, but Jeremy has been mucking things up for years now. Here are 10 things you need to know about these identical troublemakers.

1. Jason is a Miserable Drunk

Jason was arrested on Sunday for assault and disorderly conduct at a bar in Scottsdale, Arizona. He allegedly swung at the bouncers of the bar, who proceeded to beat him senseless. London was very drunk. On his way to the police station, he intentionally crapped himself, which seems pretty low for someone who used to be as renowned as he was. 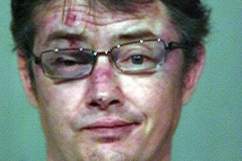 2. They’re Identical Twins
Jason may have held on to his looks a bit more than his brother, but the two are as identical as they come. Jason is older by 27 minutes, which doesn’t amount to much in the long run but was probably the source of some teasing for Jeremy.

3. Jason is Good (Too Good?) at Playing the Screw-up

So many of his roles, like Randall “Pink” Floyd in Dazed and Confused and Tom Meyer in Broken Vessels, have been the misguided rebel or the troubled addict. Only recently has he sunk low enough for his actual life to start mirroring his on-screen lives, but let’s hope he turns it all around before it gets too far out of hand.

In 1996, this London was chosen as one of the “50 Most Beautiful People in the World” by People magazine. He might’ve looked pretty a few years back, but let us refer you to the above mugshot.

5. Jeremy Got Kidnapped & Was “Forced” to Smoke Crack

In what many thought was a false tale but actually was ruled to be true in court, Jeremy was kidnapped by two men in 2010. The case was pretty bizarre, and London’s testimony was predictably completely different from the suspect’s, but the courts eventually ruled in London’s favor. According to London’s testimony, two men approached him as he changed a tire in Palm Springs, Florida. He said that the men held him at gunpoint and coerced him to drive them around in his car. The men forced him to smoke crack cocaine and buy them alcohol. He eventually dropped them off and called the police. His family famously didn’t believe his testimony and thought he was trying to cover up for relapsing into his prescription drug addiction, but the courts apparently thought otherwise.

6. Jeremy Has Had Some, Er, Family Troubles

In a court case completely unrelated to his kidnapping, Jeremy was charged with misdemeanor spousal battery and was made to undergo anger-management counseling. He’s still trying to regain custody of his son Lyrik (that name … yikes).

Jeremy had his first audition for a role in 1991’s The Man in the Moon. Jason drove him there not planning to audition, but he decided to at the last minute. Jason actually ended up getting the part, which led to Jeremy playing his stunt double in the film.

8. Jeremy Was on Celebrity Rehab with Dr. Drew

It’s probably not the role he’s proudest of, but Jeremy ended up on Celebrity Rehab with Dr. Drew after an extended battle with prescription medication. He appeared on the show’s fourth season.

9. They’re Not on Good Terms
Ever since Jason accused Jeremy of lying about his kidnapping testimony, Jeremy hasn’t wanted much to do with him. Jason thought he was simply trying to cover up the fact that he was abusing drugs and tried to pawn it off on his supposed kidnappers. They’ve seen each other, no doubt, but the family Christmas gathering probably just got a whole lot more awkward.

You read that right–Jeremy London has directed his first feature film, The Devil’s Dozen. It stars Eric Roberts, among others, and it’s being anticipated by many. He’s reportedly doing way better than he was last year, but let’s see if he can keep it up.