A paparazzo attempting to snap a shot of Justin Bieber on the side of the road being pulled over by a cop was hit by an oncoming car on Tuesday, resulting in the death of the photographer, reports TMZ.

Get this — Justin Bieber wasn’t even in his white Ferrari at the time of the incident. Bieber lent one of his pals the car and was behind the wheel with another friend in the passenger seat. As if the tragedy wasn’t bad enough, the photographer’s death wasn’t even worth it. Had he survived, whatever picture he captured wouldn’t have been worth a dime.

Would it have been worth it anyway? Never. When is enough, enough?

The Ferrari was pulled over by California Highway Patrol for a routine traffic stop on Sepulveda Boulevard when the paparazzo following it got out of his own car and tried snapping some photos of the pull-over. The photographer was then struck by the oncoming car and died at the Ronald Reagan UCLA Medical Center. 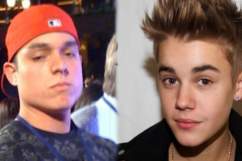 Read More
Justin Bieber
Get this--Justin wasn't even anywhere near the scene of the incident.