Despite trying to stay out of the spotlight to work on her relationship with Alabama quarterback A.J. McCarron, Katherine Webb, the beauty queen who shot to fame after sportscaster Brent Musberger obsessed over how beautiful she was during a live broadcast, is starring in the cast of ABC’s Celebrity Diving.

TMZ obtained this photo of Katherine Webb hanging out on set of Celebrity Diving with other cast mates.

The new reality show will feature celebrities competing against each by performing dives that get increasingly difficult each week. Along with Webb, the cast will also include tackle Detroit Lions Ndamukong Suh, Kareem Abdul-Jabbar, Nicole Eggert, Kendra Wilkinson, Louie Anderson, Drake Bell, Chuy from Chelsea Lately and Keshia Knight Pulliam.

Webb’s inclusion is a bit surprising since the football star’s girlfriend swore off media attention by cancelling eight interviews because she was starting to outshine McCarron who started to get a little upset. Actually, staying out of the spotlight is the exact opposite of what Webb is doing right now. She’s got a Sports Illustrated Swimsuit Edition photo shoot coming up this week, a reporting job at the Super Bowl for Inside Edition and has also been offered a spot on ABC’s upcoming season of Dancing With the Stars.

Hmm, I wonder at what point in Katherine Webb’s rise to fame will McCarron go completely insane with jealousy. I’m betting on pretty soon. 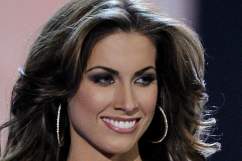