Beyonce finally admitted to faking her performance of the National Anthem at the president’s inauguration last week and sang along to a prerecorded track. During a Super Bowl press conference on Thursday, the singer shut down critics by beginning with an actual live performance of the song. Check it out:

She went on to say that she sang along to a prerecorded track because she did not have time to practice with the band.

“I practice until my feet bleed and I did not have time to rehearse with the orchestra,” she said. “It was about the president and the inauguration, and I wanted to make him and my country proud, so I decided to sing along with my prerecorded track, which is very common in the music industry. And I’m very proud of my performance.”

Beyonce, who is currently preparing to perform at the Super Bowl’s halftime show on Sunday, said she “will absolutely be singing live” at the show. 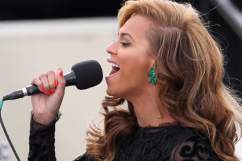