Rodriguez posted this photo to her Facebook page with this shout-out to fans: “As a thank you for all your support in the return of Letty, here’s an exclusive photo from Fast & Furious 6! “

On a cold October day in London, Michelle Rodriguez storms into the media trailer, crackling with the energy of a woman reborn.

She’s on fire, fresh off the filming of the soon-to-be-iconic airplane scene from Fast and Furious 6, the latest installment in the high-octane franchise that launched her career.

Dressed head-to-toe in brown — leather jacket, big boots and skin-tight jeans — she has the petite, lithe body of a dancer but the swagger of a biker chick.

Immortal being the key word.

After her apparent death in the franchise’s fourth film, Letty has miraculously risen from the grave, reprising her role in Fast 6 to the delight of legions of fans. A post-credits teaser hinted her return at the end of Fast 5, and here she is, in the flesh — the product of a franchise that puts its fans in the driver’s seat.

While Vin Diesel, the film’s star, co-producer and heart and soul of the last three Fast films, says he always knew his onscreen soulmate would be back — it was an enormous online groundswell that convinced the studio to resurrect Letty.

Fans were jonesing so hard for their darling that they launched petitions pleading for her return, but the most powerful lobby wielded its will on Diesel’s insanely popular fan page. At nearly 40 million likes, it’s a community larger than most sovereign nations, and when that many people speak the studio has to listen.

“Eventually it came to a point where your social networking — and you’re starting to receive this receptivity from the audience, that actually misses this connection, this chemical connection, ’cause it’s something you can’t fake,” Rodriguez said. “Me and Vin got chemistry. And we’ve got a 13-year rapport with each other. You can’t buy that with other actors — either you got it or you don’t. It’s a special thing. After a while of his fan base, which has now hit 35 million on Facebook, you know they helped out a lot, they were making videos, they were like, ‘Bring this relationship back, we want to see more of this, it’s real.’

“There is this sensation that, once Vin starts saying things, you’re like, oh God, he’s got something in his head, there’s no going back after this. And of course I back him up, and you see how the audience reacts and how cool the fans are … just always promoting the idea, and eventually the studio came along and said you know what, we’re gonna relent on this and we’re gonna bring you back.

“And in the movies you can do anything. You didn’t see — it wasn’t an open-casket thing — there’s no body, so, it worked out for the best.”

“I think that the voice of the audience is louder and clearer than it’s ever been,” Diesel said. “It’s because of people’s ability to voice their opinions online. And people like me that listen, and then go to the studio and say this is what they’re saying. I mean, did you hear all those petitions going on about Michelle Rodriguez? … People were saying, ‘She’s such a strong female character, how could you?’

“And they were blown away at the end of Fast 5 when they saw the impossible. Because when have you ever seen that in history? For real — not in a sci-fi movie, not in zombie movie — for real, when have you seen a character get cut out, the franchise get bigger, and then the character come back and be the star? Never is the correct answer.”

Rodriguez, who cringes at Hollywood’s traditional depiction of females, says the emergence of audience influence lets her stay true to her characters and her fans — giving her ammunition to fend off ill-advised direction from bigwigs who don’t get her appeal.

“It shows what kind of influence the audience has nowadays,” Rodriguez said. “For me that’s so important because … throughout my 13-year career I’ve always had this battle. I represent this specific demographic. I grew up with this specific demographic. Tomgirls are like this. And I know you don’t have a lot of them in Hollywood, but they don’t respect this kind of thing. And if I do that onscreen I don’t think it’s gonna work. … I need to represent for those little girls and those women who, like, think that I’m cool. And I gotta maintain that. And to translate that to a studio is so hard. It’s like I need charts, graphs … it’s ridiculous. Like, seriously dude, it’s not that complicated. It’s called integrity. … The morale I think for me was boosted with just the receptivity that now the studio has to the audience, which wasn’t there before when I started in this business.”

Michelle Rodriguez and director Justin Linn on the set of Fast and Furious 6.

Letty’s resurrection is just one instance of Vin’s fans’ steering of the Fast franchise. For instance, bringing Dwayne “The Rock” Johnson onboard for Fast 5 was a direct response to their will.

“I very much appreciate the feedback I get from the audience,” Diesel said. “And for the last three years I’ve been able to get direct feedback by having something as simple as a Facebook page. And I get so much feedback. You know, it was a girl named Jan — I put up a post that said ‘Who would you like to see me work with?’ and she said I’d love to see you do something with Dwayne [Johnson] in it. … Next thing you know he’s in 5.”

And there’s a big surprise in store in Fast 6, again directly stemming from a Facebook fan suggestion:

“The whole game is online, right?” Diesel said. “People are telling me what they want, what they expect. So I just recently asked [again] ‘Who would you like to see me work with?’ And they had a top female name and a top male name. The top male name is gonna be a surprise here. So people online are just gonna lose their minds.”

The Rock, whose appearance in Fast 5 was prompted by a suggestion from a Vin Diesel Facebook fan, returns in Fast 6.

Diesel has come to realize that he doesn’t own his characters; they belong to the fans. It dawned on him after his cameo in Tokyo Drift.

“When the cameo played in the theater, all my kind of New York theater upbringing, prestigious pompous sh*t went right out the window because people owned it as their own. And so, it’s ‘How much do I really own Dom?’ in a weird way. It’s like how much do I really own Riddick? I was almost at gunpoint by the public to do Riddick. And it took me eight years to get it done. And they wanted it rated R, rightfully so. Which took another stretch of impossible tasks to make happen.”

Michelle Rodriguez and ex-MMA star Gina Carano mix it up on the set of Fast and Furious 6.

In this new world where corporations spend millions to crack the enigma of the social-media hive mind, Vin Diesel, Universal Studios and the Fast franchise are leaving everyone in their dust. Vin Diesel just has to be himself, and Universal just follows his lead.

Diesel is their ace in the hole — a natural-born social media marketer whose love for his fans is undeniably genuine; 40 million people can’t be wrong — but the studio has shown flexibility by falling in line with his approach.

Simply put, they get it. And it’s working.

…Fast & Furious 6 received more mentions in social media on that day than the other five films combined, according to Fizziology, a data collection company.

Michael Moses, Universal’s co-president for marketing, told the Times that, in a rare move, the studio even encouraged cast members to share photos from the set:

We’re trying to remove the studio filter as much as possible, which is a little scary because you’re ceding control. But it makes for more authentic and organic interaction with fans.

“In this historical era where you get a presidential nomination for the first time using the Internet, there’s something to be said about that,” Rodriguez said. “And the 35 million fans that he has, I look at that like a Gallup poll. For me, I’m like, ‘Vin. Ask ’em questions. Find out what they wanna see.’ This is like, you can’t get this at a screening. At a screening you’ve got people from L.A. — 99 percent of the time out-of-work actors or people who aspire to be actors — you’re not gonna get a really good opinion of what middle America or America itself wants from a screening in Los Angeles, California, sorry. … So to have people from around the world answer these questions, that to me is so valuable. And he’s got that ability. He can tap in and listen to their responses any time he wants to. It’s a beautiful thing.”

“It’s just the audience, having a forum, which is the Internet,” Diesel said. “I always say Clark Gable would have made a sequel to Gone with the Wind if he had a Facebook page. I just know it. There would have been an On the Waterfront 2 if Marlon Brando had a Facebook page. You can’t help but to be influenced or … to appreciate people being so vocal about what’s important to them in your franchise.”

Note: Heavy.com was on-set in London for the filming of Fast & Furious 6. We got direct access to the stars and a sneak peak at the action. This is one of several articles we’ll bring you this week as we get amped for the Memorial Day launch of the most epic installment in the high-adrenaline Fast & Furious franchise. 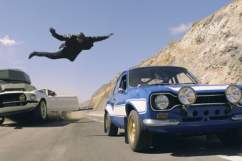 The 27 Awesomest Photos from the Set of ‘Fast & Furious 6′