Kelly Clarkson didn’t appreciate what Clive Davis had to say about her in his new memoir The Soundtrack of My Life, and is making it clear to everyone on the internet.

According to the New York Daily News, Davis, who also revealed that he is bisexual in the memoir, said that Clarkson once bust into “hysterical sobbing” in his office when he demanded that Since U Been Gone be put on her second album, Breakaway, and that she speaks before she thinks.

“It’s clear that Kelly Clarkson has a decidedly independent streak, to say the least, and often speaks in public before she realizes the implications of what she’s saying,” Davis wrote in the book.

But Clarkson defended herself on her blog on WhoSay.com and said that Davis was spreading misinformation.

“I refuse to be bullied and I just have to clear up his memory lapses and misinformation for myself and for my fans,” Clarkson writes. “It feels like a violation. Growing up is awesome because you learn you don’t have to cower to anyone – even Clive Davis.”

The original American Idol winner went on to say that she did cry in his office once, but not because he demanded Since U Been Gone to be put on her second album.

“But, yes, I did cry in his office once. I cried after I played him a song I had written about my life called Because Of You. I cried because he hated it and told me verbatim that I was a ‘sh*tty writer who should be grateful for the gifts that he bestows upon me.’ He continued on about how the song didn’t rhyme and how I should just shut up and sing. This was devastating coming from a man who I, as a young girl, considered a musical hero and was so honored to work with.”

Finally, the Because of You singer says that the 80-year-old record mogul left out of his memoir “how he stood up in front of his company at a convention and belittled me and my music.”

In Clive Davis’ memoir that was released to the public on Tuesday, he details his journey to becoming one of the most high-profile record producers in the music industry and talks about working with legendary artists such as Janis Joplin, Bob Dylan, Sly Stone, Patti Smith, Aretha Franklin, Santana, Whitney Houston and Alicia Keys. 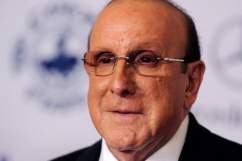 Clive Davis is Bisexual, He Reveals in New Memoir

Read More
Clive Davis, Kelly Clarkson
Kelly Clarkson didn't appreciate what Clive Davis had to say about her in his new memoir and is making it clear to everyone on the internet.