Mark Hamill spoke to ET Online and confirmed that he’s in talks about reprising his role as Luke Skywalker for Star Wars: Episode VII. Here’s what you should know about this exciting news and what Hamill’s been up to since he appeared in Return of the Jedi in 1983.

1. Hamill is in “Talks” to Star in Star Wars: Episode VII


Mark Hamill spoke to ET Online and revealed that he and other past actors for the franchise are in talks about returning for the new movie:

They’re talking to us. George [Lucas] wanted to know whether we’d be interested. He did say that if we didn’t want to do it, they wouldn’t cast another actor in our parts – they would write us out. I can tell you right away that we haven’t signed any contracts. We’re in the stage where they want us to go in and meet with Michael Arndt, who is the writer, and Kathleen Kennedy, who is going to run Lucasfilm. Both have had meetings set that were postponed — on their end, not mine. They’re more busy than I am. I said to George that I wanted to go back to the way it was, in the sense that ours was much more carefree and lighthearted and humorous — in my opinion, anyway. And another thing I’d want to make sure of is are we going to have the whole gang back? Are Carrie and Harrison and Billy Dee and Tony Daniels, everybody that’s around from the original [returning]? I want to make sure everybody’s on board here, rather than just one.

2. He’s The Co-Writer of a Comic Book Series


Hamill is the current co-writer for the Dark Horse comic book The Black Pearl. The comic’s plot revolves around Luther Drake, a man who chooses to become a costumed “hero” by accident and through pressure from the media.

3. His Political Views Are Literally Comical

When OnTheRedCarpet.com asked Hamill about the 2012 Presidential Election at Comic-Con 2012, he had this to say:

If you don’t vote for Barack Obama, you’re insane. ‘Cause without him, I think the middle class will completely disappear. And you look at Romney and I’m sure he’s a nice guy, but he is like The Thing, he only imitates human behavior, he’s not actually human himself. (…) So God bless him, I’m enjoying him running for office but I just came out as a lifelong Democrat.

Hamill is known for his on-screen movie roles, but he’s loved for his voice work on cartoons. Mark performed voice-over work for Batman’s most famous villain, The Joker, in Batman: The Animated Series. The series ran from 1992 to 1995. Hamill also voiced The Joker for two highly acclaimed Batman video game – Batman: Arkham Asylum and Batman: Arkham City. Some of Hamill’s best work for the character can be seen above.

5. He Had a Starring Role in the Wing Commander Series 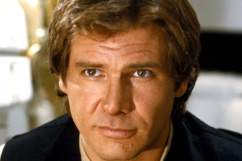