Whether you’re a diehard Belieber or simply just an entertainment junkie, you’ve probably heard about Milyn “Mimi” Jensen. So who is she? She’s the girl Justin Bieber allegedly hooked up with back in December, according to Radar Online, and whom he is pursuing again now that he and Selena Gomez have officially called it quits. Here’s what you need to know about the Biebs’ new love interest, Milyn “Mimi” Jensen.

1. Justin Bieber Allegedly Cheated on Selena Gomez with Milyn “Mimi” Jensen
Mimi is the girl who apparently broke Justin Bieber and Selena Gomez up after Bieber hooked up with her at a Beverly Hills Four Seasons hotel while he was still dating girlfriend Gomez. The singer was hanging out with pal Lil Twist, and they invited Mimi and her friend back to the hotel with them for a night of fun. Bieber allegedly took Mimi back to his bedroom suite and pounced on the 22-year-old girl.

“Justin surprised her by saying, ‘I want to know if you taste good.’ He started kissing her cheek and ear and neck and then her whole body,” an insider said.

2. They Hooked Up in December
Bieber and Jensen reportedly hooked up in December, while he was still official with Selena. The couple broke up in November, but briefly got back together again in December.

3. Justin and Selena Broke Up for Good on New Year’s
The on-again off-again, off again couple didn’t suffer their final breakup until New Year’s, meaning if Justin did hook up with Mimi in December, it makes him a cheater, and it’s likely the reason he and Selena called it quits for good.

4. Their Rendezvous Involved an Intense Night of Smoking Weed and Sipping “Sizzurp”
The insider told Radar Online that the Bieber-Jensen rendezvous began with a joyride to pick up some weed following a trip to McDonald’s. They went back to the hotel to indulge in a night of debauchery with the addition of “sizzurp,” a drink made with codeine cough syrup.

5. He Tried to See Jensen Thursday Night
Reports are saying that the pop star is seeking a second encounter with Jensen. Justin and Lil Twist were back at the Four Seasons Hotel on Thursday night and called Mimi’s friend to see if they would be up for another fun night. Now that Justin and Selena are officially done-zo, at least there’s nothing wrong with it this time. Unfortunately for the Biebs, Mimi wasn’t available because she left L.A. to start filming a reality-TV show in Miami. 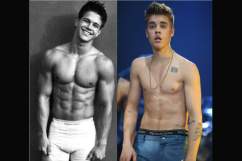 6. Jensen is a Nursing Student
Jensen, an aspiring model, has a solid backup plan. She’s pursuing her nursing degree.

7. She’s Also a Reality-TV Star
Jensen was recently cast for Oxygen’s realty-TV show, Bad Girls Club. She posted this message to her Twitter account on Friday after landing in Miami to start filming:

8. Jensen Says She Would Have Loved to See Justin Again
Although Mimi knew her hookup with Bieber was just a rebound from Selena Gomez, after hearing that the singer wanted to see her again, she was very flattered and would have loved to see him again, according to the insider:

Mimi heard about Justin trying to ask her out again and told her friend she would have loved to have another chance with Justin but she has already started filming in Miami. She really thought Justin was sweet and realized that even though they only hooked up because of Selena, she was excited to hear she might get a second chance.

9. Selena is So Over the Biebs
Justin can go on and chase after Jensen all he wants because sources say Selena is done with Justin for good. The Wizards of Waverly Place star has moved on and has been seen out partying with several other guys, including Hunger Games star Josh Hutcherson.

10. Bieber’s Rep Says It’s All BS
Looks like even if any of these rumors had an ounce of truth to them, Bieber isn’t talking. Gossip Cop recently contacted Bieber’s rep about the whole ordeal, and his handlers are passing it off as a bunch of “BS.”