Ukranian model/actress Olga Kurylenko has become a household name after starring in prominent roles in films like Hitman and Quantum of Solace. Now Olga Kurylenko is working on her next big projects coming in April, starring alongside actors Tom Cruise and Ben Affleck, respectively.

Here’s what you should know about this Ukrainian beauty and her surging film career.

1. She Lived in Poverty in the Ukraine


Olga Kurylenko was born in the city of Berdyansk, Ukraine, where she grew up during most of her childhood. Her parents were divorced when she was 3, and she raised by her mother. She lived under a tiny apartment with eight relatives. Her mother barely supported herself and her daughter by working as an art teacher. During her upbringing, Olga spent seven years learning to play the piano and studied ballet until she turned 13.


When Olga and her mother traveled to Moscow, Olga was spotted by an agent who offered her a job as a model. Suspicious at first, her mother reluctantly agreed to let her daughter pursue modeling. When she turned 16, Olga moved to Paris, became a French citizen, learned French, and signed up with the Madison Modeling agency. Two years later, Olga graced the covers of magazines like Glamour, Vogue, Elle, and Marie Claire. She also became the face of cosmetics and underwear brands like Bebe and Hlena Rubinstein.

3. Olga Originally Wanted to Be a Surgeon

Olga Kurylenko didn’t always wanted to be a model. When she was growing up with her mother, Marina Alyabusheva, Olga told her she wanted to be a surgeon.

When she was 7 or 8 she found a newborn kitten and it didn’t look like it would make it. But Olga insisted that we do CPR to the poor pet. I said we couldn’t and she burst into tears.

But when Olga was recruited a a model, her mother gaver her full support, despite the revealing shoots:

I always told her that I love a beautiful nude female body. I was never against her advertising underwear. I was teaching her that it’s a form of art and there’s nothing obscene about it as it’s usually portrayed. I am very proud that the West didn’t break her. For instance, she doesn’t smoke like other models.

4. Her First Acting Gig Was in a Music Video

Before her big break in the James Bond film Quantum of Solace, Olga first went into acting when she appeared in Seal’s music video “Love’s Divine” in 2003, a track on his fourth album. After that, she appeared in French films like L’Annulaire and in the Paris, Je t’aime segment “Quartier de la Madeleine” alongside Elijah Wood. It wasn’t until 2007 that American audiences were introduced to her presence in the films Max Payne and the video game adaptation of Hitman.

5. She Got Married Twice


Olga was married in 2000 to French photographer Cedric van Mol, but divorced four years later. She moved on in 2006, marrying an American named Damian Gabrielle, who is a mobile phone accessory entrepreneur. However, their marriage didn’t last either and the couple divorced in late 2007.

6. She Runs a Charity in Ukraine For Underprivileged Kids


After gaining momentum as an actress, Olga used her celebrity status for goodwill toward children living in poverty in the Ukraine. She became an active philanthropist, donating $10 million to help kids from her homeland who suffered the same fate she did as a child. According to And Magazine, Olga dedicated her time to fundraising and raising awareness of the issues close to her heart.

7. Olga Almost Had a Street Named After Her

Olga Kurylenko has given her country pride after appearing in international films. In her hometown, the mayor of Berdyansk ,Anatoly Stepanenko, had high hopes of her putting their country on the map. RT reported that the mayor even would go far as to name a street after Olga. He said:

I think a lot of world famous actresses are probably dying of jealousy. And we are so happy about Olga’s success. We want to build our own hall of fame and will ask Olga to leave her footprint in stone.


In an interview with BBC, Olga Kurylenko told them about her visit with Ukraine’s former first lady Kateryna Yushchenko in October 2008 along with her mother. The former first lady thanked Olga for setting Quantum of Solace‘s premiere in the Ukraine. “They were so warm and welcoming. I went with my mother. It was nice to go back to my country — I only go there about once a year because I don’t have time,” Olga said.


After starring in many films, Olga Kurylenko tried her hand in television when she played the role of a hotel owner’s wife Vera Evans in the Starz original series Magic City.  She starred opposite Jeffrey Dean Morgan in this period drama set in 1960s Miami. Olga will be returning to the show this summer in the drama’s second season.

10. April Will Be a Busy Month For Her

The Ukrainian actress has two films coming out on April 12. The first is a film by Terrence Mallick called To the Wonder, labeled as a romantic drama starring Olga, Ben Affleck, Rachel McAdams and Javier Bardem. The film has already been screened at the 2012 Venice Film Festival to mixed reviews from critics and audiences alike.

The second one is a sci-fi feature called Oblivion, by Tron: Legacy‘s Joseph Kosinski, in which Olga stars opposite Tom Cruise. So we’ll see two sides of her this April when both films come out. 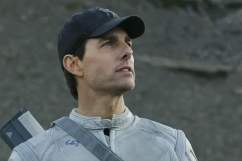