Howard Stern added his input to the controversy between Clive Davis and Kelly Clarkson after the record producer slammed the pop singer in his recently released memoir, The Soundtrack of My Life, reports the New York Post.

Davis, who worked with Clarkson in the past and was reportedly dissatisfied with her third studio album My December, wrote about his issues with the original American Idol star, saying she burst into “hysterical sobbing” in his office because creative differences and that she speaks before she thinks. 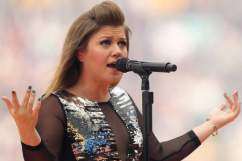 Kelly Clarkson Slams Clive Davis After Being ‘Belittled’ in Memoir

Well, Howard Stern is taking Kelly’s side and backed her up on his radio show on Wednesday.

“I always find it sickening when management guys like to set the record straight about how f–king creative and what geniuses they are,” Stern said. “And, like, this guy’s trying to diminish what she does? Doesn’t he have enough in life? Can’t he sort of tell his story without f–king degrading her and putting her down?”

The public feud between Davis and Clarkson started when the pop star defended herself against Davis’ comments in a blog post, saying that he was having “memory relapses” and spreading “misinformation.” The music mogul made a statement on Twitter a day later.

“In the book, I provide an in-depth look at our years together during which we shared major multi-platinum success, as well as a few creative differences,” Davis writes. “I am truly very sorry that she has decided to take issue with what I know to be an accurate depiction of our time together.”

Is anyone else tired of the fact that celebrities always seem to fight like middle school children? Instead of hiding behind their Twitter accounts, let’s throw them in a wrestling ring and watch them duke it out old school, like Celebrity Death Match. What ever happened to that show, anyway?