They don’t have multi-million dollar contracts. They aren’t greeted by stadiums filled with screaming fans. These animals are in it only for the love of the game. Windsurfing dogs, water skiing elephants, basketball dunking otters — welcome to the wide world of animal athletes.

This basketball playing sea otter is all like Air Bud who?

This dog cites Air Bud as an inspiration.

This dog is named Ace, maybe.

Why fly when you can skateboard?

Imagine the teeny-tiny Masters jacket that would go on this little guy!

This monkey doesn’t quite have the rules of baseball down yet, but he’s getting there.

Anything in the rule book about using your trunk while playing soccer?

The dog on the right is clearly enjoying surfing most.

This caddy wins the Best Summer Job Ever award.

Only the most adorable punk ever.

This guy is participating in the All Star Slam Trunk contest.

If your games of fetch don’t involve a canoe, then I don’t know what you’re doing.

Action shot of the most intense game of soccer ever.

Because sticking your head out the window isn’t enough for some dogs.

Who wants to go for a kayak?

Tillman the bulldog is famous for skateboarding, but he enjoys shredding it on fresh powder on occasion, making him the Shawn White of the canine world.

The Crows from Dumbo said it best, “I’d be done seein’ about everything when I see an elephant waterski.” 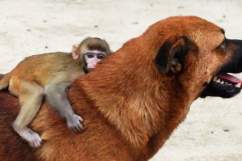