In the most recent instance of Green Day forever ruining musical theater, Billie Joe Armstrong has signed on to contribute music to an adaptation of Shakespeare’s beloved classic, Much Ado About Nothing, according to the New York Times.

Got friends who love a good cringe story? Share it!

Yale Repertory Theater’s production, to be called These Paper Bullets, is a rock-tinted re-staging that focuses on a band from Liverpool (Fab Four, anyone?) that struggles with the industry and their love lives.

This isn’t BJ’s first foray into the world of theater — remember when his band made a rock opera out of their 2004 record American Idiot? Yeah, neither does anybody else. Billie has just come off a very public rehab stint, and Green Day is about to resume the tour that was suspended for his treatment.

The production, adapted by Rolin Jones and directed by Jackson Gay, is one of six to take place in the Yale Rep’s 2013-2014 season — among the others are Tennessee Williams’ A Streetcar Named Desire and Dario Fo’s Accidental Death of an Anarchist. 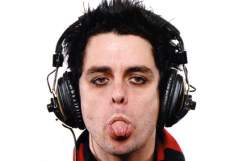