As soon as Carly Rae Jepsen found out that the Boy Scouts of America bans gay members, she didn’t waste time pulling out of the association’s National Scout Jamboree concert where she was scheduled to sing this summer. The Call Me Maybe singer said in a statement that she will always support the LBGT community.

“As an artist who believes in equality for all people, I will not be participating in the Boy Scouts of America Jamboree this summer,” Jepsen said. “I always have and will continue to support the LGBT community on a global level and stay informed on the ever-changing landscape in the ongoing battle for gay rights in this country and across the globe.”

She also told MTV News that she is hoping that her decision helps the Boy Scouts change their stance on the issue.

“I mean, it was sort of one of those things that I kind of have my opinions about, and everyone’s entitled to their own, but it wasn’t necessarily something that I felt comfortable backing once I learned more about it,” she said. “And that being said here’s hoping they make the right decision and I’m praying that moves like this will help.”

Jepsen isn’t the only artist that pulled out of the summer festival. Train was also scheduled to perform at the Jamboree and pulled out because of the association’s ban on gay members. However, they said they would gladly return if the Boy Scouts reversed the ban.

Despite the drop outs, a spokesperson for the Boy Scouts of America said the show will still go on.

“We appreciate everyone’s right to express an opinion and remain focused on delivering a great Jamboree program for our Scouts,” the spokesperson said. 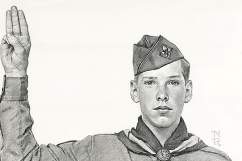 Read More
Carly Rae Jepsen, Equality, Gay Marriage, Gays, Train
The "Call Me Maybe" singer said she hopes her decision influences the association to change their stance on the issue.