Lil Wayne is reportedly in the ICU after suffering from more seizures, according to TMZ. Doctors were forced to put the rapper into a medically induced coma and he is now in critical condition.

Lil Wayne was rushed to Cedars-Sinai Hospital in Los Angeles on Tuesday after having multiple seizures. He was released on Wednesday and was reported to be doing well, but his body guard found him hours later in his room on the floor and unconscious. 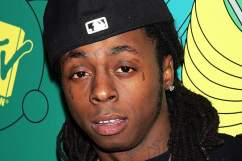 Sources tell TMZ that there is evidence that Weezy went on a sizzurp binge after being released on Wednesday because high amounts of codeine was found in his system. His stomach was pumped three times.

However, Mack Maine, the president of Young Money, tweeted Friday night that the rapper is alive and well. He also gave TMZ a shout out:

We will be releasing an official statement shortly but dont believe the nonsense about comas and tubes to breathe…that’s false!!

I’m good everybody. Thx for the prayers and love.