Thirty-two-year-old actor Ryan Gosling is prepping two new films for 2013 — The Place Beyond The Pines (March 29) and Only God Forgives (sometime in May). But he’s also ready to take a step back from the big screen for a while.

Ryan Gosling spoke to the Associated Press about his plans to step away from acting:

I’ve been doing it too much. I’ve lost perspective on what I’m doing. I think it’s good for me to take a break and reassess why I’m doing it and how I’m doing it. And I think this is probably a good way to learn about that. I need a break from myself as much as I imagine the audience does.

During the same AP interview, Gosling mentioned his tattoos seen on him in the film, The Place Beyond The Pines:

One thing that kind of handed me the key to the character was that I totally overdid it with the tattoos. I said to (director) Derek (Cianfrance), ‘I’ve got to lose this face tattoo. It’s the worst. It’s so distracting and it’s going to ruin everything.’ And he said, ‘Well, I’m sure that’s how people with face tattoos feel. So now you have to pay the consequences of your actions.’ So I had to do the whole film with it and now see it on posters. It gave me a sense of shame that I feel was inherent to the character.

This isn’t the first time that Ryan spoke of retiring from the acting game.

When Ryan did an interview for IFC in 2011, he spoke of retiring for a while then:

I’ve been doing this since I was 12… I don’t want to act much longer; I can’t do one thing my whole life. I know there are only so many characters I’ll be able to play. It will be over whenever the inspiration dries up. 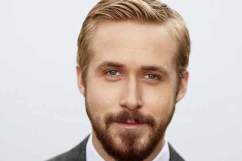 Finally! The First Trailer For Ryan Gosling In ‘Only God Forgives’