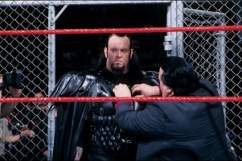 We’re at the halfway point, people. There’s about 50 more themes that we need to count down, so sit down with us as we count down the greatest wrestling themes from 50 through 41.

50. The Undertaker – “American Badass”
Undertaker Judgment Day Theme(First American Bad Ass Theme)Give It A Thumbs Up And Watch Other Videos Copyright Disclaimer Under Section 107 of the Copyright Act 1976, allowance is made for "fair use" for purposes such as criticism, comment, news reporting, teaching, scholarship, and research. Fair use is a use permitted by copyright statute that might otherwise be infringing. Non-profit, educational or personal…2010-01-20T05:21:56.000Z
For weeks and weeks in the spring of 2000, an eerie set of videos aired on WWF TV. Supposedly, someone’s judgement day would soon be upon us. Any wrestling fan with a half a brain already had a clue who that person was. When Judgement Day 2000 rolled around, an “American Badass” version of the Undertaker rode down to the ring on his chopper and took no prisoners. This Kid Rock adapted tune signaled a new beginning for the Deadman.

49. Bryan Danielson – “The Final Countdown”
VideoVideo related to the 100 greatest wrestling themes countdown: #50 – #412013-03-25T10:23:13-04:00
Before he was screaming “YES! YES! YES!,” he was telling referees he had till five to break his hold in ROH. Daniel Bryan aka “The American Dragon” Bryan Danielson had an illustrious career in this awesome independent federation. He was an old school type of guy who loved to make any of his doubters tap out to his many submission holds. The lively crowd at past ROH events (including me) went into a frenzy when the opening horns of his theme song erupted. “IT’S THE FINAL COUNTDOWN!” Bryan took a campy song and made it listenable.

48. Mike Awesome – “Awesome Bomb”
VideoVideo related to the 100 greatest wrestling themes countdown: #50 – #412013-03-25T10:23:13-04:00
Who’s one of the most unsung professional wrestlers to never win a world championship from the WWF/WCW? Mike Awesome. Mike towered over plenty of lesser men, but what made him stand apart from the rest was his high flying abilities. Mike could awesome bomb you out of your boots, plus he could land an ever so graceful body splash off the top rope at any time. His ECW theme meant one thing – you were about to get your effin’ teeth kicked in.

47. Chris Benoit – “Whatever”
Chris Benoit Theme SongCheck out my new gaming channel! https://www.youtube.com/user/360GamesWorld : )2008-04-24T23:13:16.000Z
Yes, I know…and I totally understand. Chris Benoit’s legacy has forever been tainted by the unforgiving acts he committed against his now deceased wife and son. It’s hard to look back on Benoit’s many accolades in wrestling without shaming him for his cruel acts. It may be hard for some, but I still appreciate Benoit’s tenure as one of the finest technical wrestlers to enter the ring. His final theme song is a rocking good time.

46. Jake “The Snake” Roberts – “Snake Bit”
Jake "The Snake" Roberts ThemeJake The Snake Roberts Theme WWF2008-11-01T22:16:46.000Z
Jake “The Snake” Roberts didn’t have to yell at the top of his lungs to get your attention. He simply DDT’d into oblivion and snuck his pet snake over your limp body whenever the time was right. Jake’s legacy as a creepy protagonist/antagonist has continued to reign for years to come. This theme reflects Jake’s slippery yet effective in-ring (and outside of the ring) tactics.

45. Rob Van Dam – “Walk”
Rob Van Dam Arena Theme "Walk (ECW Edit)"Credit to Kilgore. -uploaded in HD at http://www.TunesToTube.com2011-11-24T20:15:13.000Z
ECW featured a whole bunch of misfits who could wrestle better than some of the big two’s so-called “superstars.” Rob Van Damn during his heyday was untouchable. The man seemed to wrestle a five-star match every night, plus his 23-month ECW Television Title reign was nothing to sneeze at. Pantera’s “Walk” added to the legend that is Rob…Van…Dam.

44. Jack Swagger – “Get On Your Knees”
Get On Your Knees – Jack Swagger Theme Song w/ DOWNLOAD LINKGet On Your Knees – Jack Swagger http://www.sendspace.com/file/4y1lpg2009-01-28T17:56:14.000Z
First off, I gotta say – the sexual overtones of this theme are too hard to ignore. Now that we’ve gotten that out of the way, let’s talk about the “All American, American” Jack Swagger. Ever since Kurt Angle moved on from the WWE, a new super technical wrestler has taken over the ring. Swagger is a super tall, super lanky and super tough athlete that can handle anyone. This theme (which was performed by AGE Against the Machine, funny enough) commands you to get on your knees. For a wrestling clinic, of course.

43. “Hollywood” Hulk Hogan – “Voodoo Child”
WCW Hollywood Hulk Hogan Theme HD soundVoodoo Child- Jimi Hendrix2009-05-05T04:36:49.000Z
We all know the infamous moment – Hogan turns his back on his “Hulkamaniacs” and becomes a starting member of the NWO. Hogan’s move away from the red and yellow to the black and white was legendary. I loved “Hollywood” Hulk Hogan’s super slimy ways and his too cool persona. Hogan took on this theme from another super cool guy (who just happens to be one of the greatest guitarists of all time). His WWE return in the 2000’s needed this song to make it effective.

42. Nation of Domination – “Power”
VideoVideo related to the 100 greatest wrestling themes countdown: #50 – #412013-03-25T10:23:13-04:00
BROTHERS AND SISTERS, STAND UP! Anyone who’s of African descent took this stable too seriously (including me). They ran roughshod over their Caucasian counterparts, but they were open to dropping any race of wrestlers on their heads. They didn’t discriminate with those ass whuppin’s. Farooq, The Rock, Kama Mustafa, D’Lo Brown, Ahmed Johnson, Mark Henry and…OWEN HART? Yep, he ran with them too. The powerful bass on this theme fit well with this powerful theme. We need a new Nation of Domination, son. *throws up fist*

41. The Legion of Doom/The Road Warriors – “What A Rush”
Road Warriors Theme SongThis is the Road Warriors WWF theme song. I do not own the music in the video it is exclusive property to it's exclusive owners.2009-07-08T03:41:50.000Z
What a rush, indeed! The Road Warriors may just be the greatest tag team in history. They won championships everywhere, they wreaked havoc, and no one had an easy time putting them down. Their legacy as the greatest is considered way more than above average. When fans speak of the “Warrior Pop,” you can link this thrashing theme to the crowd’s explosion at the sight of these guys. 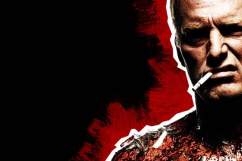