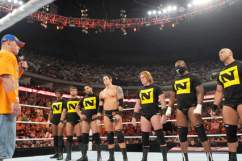 Are you ready? Two points for you if you know what theme these words are taken from. We’re at part of three of this ginormous list of the 100 greatest wrestling themes. Let’s cut the small talk and get to the good stuff, shall we?

80. Rikishi/Too Cool – “U Look Fly Today”
VideoVideo related to the 100 greatest wrestling themes countdown: #80 – #712013-03-21T10:18:20-04:00
Before Rikishi “did it for da Rock,” he was a fun loving Samoan who loved to shake his tailfeather. His two homies, Scotty 2 Hotty and Grandmaster Sexay, always joined in on the fun after every victory they nabbed together. This dance floor worthy theme is synonymous with the Attitude Era’s fun times.

79. Raven – “End of Everything”
VideoVideo related to the 100 greatest wrestling themes countdown: #80 – #712013-03-21T10:18:20-04:00
I was ecstatic when Raven made it up to the big leagues. He’s one of the best talkers in the biz, his catchphrase is unforgettable, and watching him loathe in the corner of the ring still cracks me up. The master of the Evenflow DDT is a rebel WITH a cause. His remixed 2002 theme from Forceable Entry sounds just as good as it did when it debuted.

78. Rhyno – “Man Beast”
VideoVideo related to the 100 greatest wrestling themes countdown: #80 – #712013-03-21T10:18:20-04:00
GORE! GORE! GORE! Paul Heyman does that way better than me, so I’ll just speak on the “Man Beast” instead. Rhyno is a world destroyer, who’s mean streak in ECW and the WWF was full of hardcore matches and brutal moments. His 2nd WWF theme is the last thing you’d hear if a real rhino was on the loose. Rhyno is still a force in the wrestling industry.

77. Jeff Hardy – “No More Words”
WWE:Jeff Hardy Theme "No More Words" [CD Quality + Download Link]Download Link: http://www.mediafire.com/?aqlqb5ph58vfq98 Title: No More Words Artist: Endeverafter Used: 2008 – 2009 Lyrics: I got a sharp stick, I keep in my pocket I speak volumes never utter a word When you strike a match, a fire will happen But the line between the smoke and the flames get blured Don't you see the…2011-08-26T18:52:57.000Z
Once Jeff Hardy got uber-popular and started wrestling for world titles, he needed a theme song that captured the feel of his unbreakable spirit. EndeverafteR took the familiar sound that was birthed in the original Hardy Boyz theme and gave it their own flavor. The inspiring tune they ended up giving to Jeff fit the “Charismatic Enigma” like a pair of torn up gloves.

76. APA – “Protection”
VideoVideo related to the 100 greatest wrestling themes countdown: #80 – #712013-03-21T10:18:20-04:00
I always associated this theme with a swift ass kicking that wouldn’t last very long. Bradshaw (before he became a WRESTLING GAWD!) and Farooq/Ron Simmons (DAMN!) rented out their protection services out to anyone who paid well. Remember: Go THROUGH the door and you won’t catch a beatdown from the APA.

75. “Dashing” Cody Rhodes – “Smoke and Mirrors”
"Dashing" Cody Rhodes 7th Theme Song "Smoke & Mirrors""Smoke & Mirrors" TV/TV WWE Copyright, All Rights reserved. Theme Count 1st: "Out To Kill" (WWE Edit) 2nd: "How Do You Like Me Now" (2nd Version) (2nd WWE Edit) (w/Alt. Intro) 3rd: "Priceless" (2nd Version) 4th: "Priceless" (3rd Version) 5th: "Priceless" (4th Version) 6th: "It's A New Day" 7th: "Smoke & Mirrors" 8th: "Broken Dreams"…2010-10-23T19:17:38.000Z
Ya know, it’s kinda funny how everyone projected Ted DiBiase Jr. as the guy who would become a 2nd generation superstar faster than Cody Rhodes. Oh how wrong those people were. Cody took on an awesome gimmick that painted him as an attractive fella who’s face shouldn’t be harmed. The theme that accompanied him to the ring during his first run as “Dashing” is hard to ignore. You want to hate it, but it’s too catchy to dislike.

74. Billy Kidman – “Kid Krusher”
Billy Kidman – "Kid Krusher" WCW TurnerTron – FULL CDQ+F ThemeDownload link: http://www.mediafire.com/?5h2izqzmzzx *** NO COPYRIGHT INFRINGEMENT IS INTENDED. THESE VIDEOS ARE ONLY MEANT FOR THE ENJOYMENT OF VIEWERS, AND IS NOT FOR A PROFIT. VIDEO AND THEME OWNED BY WORLD WRESTLING ENTERTAINMENT. ***2009-12-22T02:58:26.000Z
If you were lucky to have access to cable back in the late 90’s, you were probably glued to your TV during wrestling’s Monday Night Wars. WCW one upped their competition in the WWF by using the Cruiserweight Division to spice up Nitro. Billy Kidman was one of those super high-flyers that left audiences in awe of his Shooting Star Press. His theme (which sounds like it was recorded in someone’s basement) brings back a lot of great memories.

73. Scott Steiner – 2002 WWE Theme
WWE – Scott Steiner(Holla If Ya Hear Me) ThemeSteiner's last WWE theme song before heading to TNA!2009-01-28T06:14:47.000Z
Scott Steiner likes his women (and his suplexes) fast. When Steiner made his shocking debut in Madison Square Garden for Survivor Series 2002, the crowd lost their minds. “Big Poppa Pump” finally entered the WWE with some blaring sirens and flashlights flashing behind him. This remixed version of his final WCW theme is Steiner-worthy. FAT ASSES!

72. Lita – “It Just Feels Right”
VideoVideo related to the 100 greatest wrestling themes countdown: #80 – #712013-03-21T10:18:20-04:00
There’s the beautiful Trish Stratus…and then there’s the lady daredevil named Lita. Lita caught the eyes of every man, woman, and child with her top rope endeavors and punk rock persona. Her theme song was rebellious and her entrance always got my attention (for reasons that I’m sure all men would understand). LITA FOR THE WWE HALL OF FAME 2014!

71. Tazz – “13”
VideoVideo related to the 100 greatest wrestling themes countdown: #80 – #712013-03-21T10:18:20-04:00
That heartbeat. Those heart monitor beeps. The crash of that snare drum. That ripping guitar riff. It all formed into one super tough song for a super tough wrestler from the Red Hook section of Brooklyn. Tazz’s first year in the WWF was a treat for a big ECW fan like me. Watching him walk out with that face towel and choking out losers in the ring was a joy. 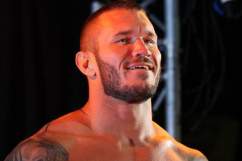