Another bad move by The Bieb was recorded and broadcast by ITN in the UK. The Canadian star seems to lose his temper at one photographer repeatedly cussing him out and asking him, “What you say? What you say?”

Was The Bieb Justified in his Rant? Share it!

Justin can also look forward to this front page in English tabloid The Daily Star tomorrow:

The Bieb tweeted just after the altercation:

Ahhhhh! Rough morning. Trying to feel better for this show tonight but let the paps get the best of me…

Sometimes when people r shoving cameras in your face all day and yelling the worst thing possible at u…well I’m human. Rough week

Not gonna let them get the best of me again. Gonna get focused on this show tonight. Adrenaline is high now. Gonna put it on the stage

Justin heads to the O2 in London for one more show tonight in what has go down as a pretty poor week for the Canadian star. 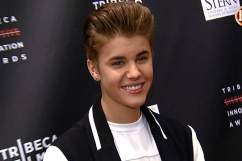 Justin Bieber Passes Out Backstage at Concert in London