Two and a Half Men has been renewed for an eleventh season, but Angus T. Jones won’t be a regular character, reports Entertainment Weekly.

Ashton Kutcher and Jon Cryer have signed back on full-time for a new season of the hit sitcom, with Kutcher reportedly getting paid $700,000 per episode, but the same can’t be said about Jones. Warner Bros. is talking to the actor about making his character in the show a recurring role, meaning he will merely make an appearance every now and then, much like Miley Cyrus’ character, Missi.

Jones’ character Jake has been in the military since the last season, which already limited the number of episodes he appeared in. The fate of the actor’s involvement in the show has been speculated since he bashed the show in a YouTube video last year, but there is not word if the decision has any relation.

CBS entertainment president Nina Tassler told reporters in January that the network and the actor resolved their issues since the video.

“The kid’s 19 years old,” Tassler said at the time.”I’ve got a 24 year old. Between the ages of 19 and 24 there’s been plenty of things my kid has come out and said that I wish he hadn’t but the bottom line is cooler heads prevailed. [Jones has] been a beloved member of that cast for years and years and he issued a public apology. At the end of the day, they want him back and he wants to come back and that’s it.”

The Jones drama is not the only controversy that has surrounded the show in recent years. In 2011, production of the shows eighth season was cut short after Charlie Sheen publicly critisized the show’s creator and executive producer Chuck Lorr. 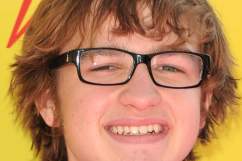 Read More
Angus T. Jones, Television, Two and a Half Men
Warner Bros. is talking to the actor about making his character in the show merely a recurring role.