A full-length trailer for the Kimberly Peirce remake of the 1976 Brian De Palma film Carrie has finally been released!

If you are not familiar with the classic horror movie, or the book it was adapted from written by Stephen King, Carrie chronicles the deterioration of a high school girl with telekinetic abilities who suffers physical and emotional abuse from her radically religious mother.

Chloe Grace Moretz assumes the large task of filling Sissy Spacek’s shoes as Carrie alongside Julianne Moore as her deranged mother (originally played by Piper Laurie). Peirce’s remake of the tale also gives it a bit of a modern twist, as seen by the group of gym class girls snapping photos of the vulnerable Carrie with their smartphones during the famous shower scene. Carrie is the first feature film directed by Peirce since her 2008 film, Stop-Loss, though she is most known for her breakthrough indie Boys Don’t Cry.

As for Moretz, the up and coming starlet is building a solid reputation for herself thanks to roles such as Hit-Girl in the popular film Kick-Ass, Abby in Let Me In and Carolyn Stoddard in the Dark Shadows remake and now Carrie.

The fresh adaptation of the movie should be at the least entertaining, but will it live up to the original? 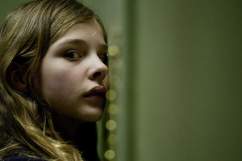