From the director of District 9 comes the new sci-fi action film Elysium, set in the year 2154 where the population’s “privileged” lives on a beautiful space station called Elysium where there is no poverty, war or sickness, while the rest is stuck in the slums of Earth.

Matt Damon plays an Earth-dwelling guy who finds himself caught up in a fight for his life on a mission to Elysium. Jodi Foster is also featured in the new film, whose character’s job is to keep out those who cannot afford a spot on the pristine vessel, a.k.a Damon.

Ever since Neill Blomkamp directed the successful Oscar-nominated District 9, fans have been anticipating the release of the next film by the director. Judging by the trailer, Elysium looks like it is going to be an epic follow up to the alien tale.

Check it out in theaters August 9! 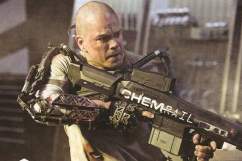