We were already psyched about the biggest action movie of the summer.

But after seeing this all-new final trailer, it’s official:

Fast and Furious 6 is going to kick ass.

Vin Diesel and the gang put the pedal to the metal in the most over-the-top installment of the famed Fast franchise. More cars, more fights, more women, and more insane high-octane action than any other movie could handle.

Letty (Michelle Rodriguez) is back from the dead and has turned to the dark side, pairing up with Luke Evans, the ultimate ruthless villain. And now MMA hottie Gina Carano joins the mix alongside The Rock, who is … well, he’s The Rock.

After you watch the trailer (three or four times), buy your advance tickets here.

You really have no excuse for not getting a serious dose of popcorn action this summer with Fast & Furious 6. 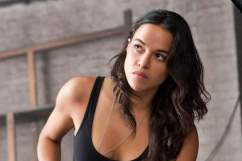