The popular high school musical television series, Glee, is known for tackling sensitive issues (bullying, homophobia, teen pregnancy, etc.), but Thursday night’s episode may have had the most sensitive theme yet: school shootings. The episode, titled Shooting Star, revolved around a harrowing event at McKinley High School after two gunshots were heard during rehearsal. Here’s what you need to know about the episode.

1. An “Unthinkable Event” Occurs at McKinley on Thursday Night’s Episode


This is what the network promo read:

“The members of New Directions are prepping for Regionals, but when an unthinkable event occurs at McKinley High, perspectives are put into order.”

In the episode, during a rehearsal, the school’s glee club, the New Directions, hear two gun shots ring out through the hallways. The school is immediately put on lockdown and the students, shaken up, huddle in a corner with the lights off. Panic ensues when the group realizes that a few of them are missing, including Britney, who is meanwhile hiding in a bathroom stall, crying. The scene is quite intense and raises emotions considering recent school shootings.

3. The Episode May Be Too Soon for Newtown Parents
The Newtown Action Alliance warned the public to watch the episode with caution. The organization issued the following statement:

According to someone who blogs for an Internet site that is a TV spoiler site, the TV show, Glee that airs tonight on Fox is going to depict a school shooting from the vantage point of the students hiding in the dark. He said it is extremely harrowing and it even freaked him out and he’s not from here.

I would suggest if you do watch this TV show to either not watch it tonight or watch with caution.

5. The Episode is Meant to Teach an Important Lesson
The episode is said to be meant to convey how important it is to always communicate with your loved ones before, during and after a traumatic event, such as a shooting, while they are still around. 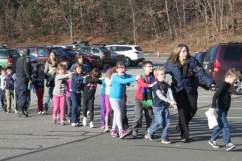