Jamie Foxx, who’s known for his many roles in various film genres, will be going behind the camera to develop a new series for the Syfy Channel.

According to Deadline, the Django Unchained actor will be producing, writing and directing a five-episode horror anthology series to debut this Halloween.

During an upfront presentation Wednesday evening, Syfy unveiled its plans for the network, which include a high-profile anthology series being developed by Foxx. The Oscar-winning actor says that he will be directing all five episodes of this anticipated series with a possible cameo on the show. Syfy revealed that the show will debut during its annual 31 Days of Halloween programming special.

The new series will be inspired by classic horror series like The Twilight Zone and Tales from the Crypt. The untitled series will deliver scary tales that display themes like envy, jealousy and superficiality. “This is a project that I’ve wanted to do for a long time and I’m so happy to see it come to life,” Foxx said.

The show will be produced by Foxx’s Foxxhole Productions and the network’s Universal Cable Productions. Flight of the Conchords‘ Troy Miller will executive produce the series with writers Jeff Stilson, Jamie King and Julie Yorn. The project will be written by Terminator: Salvation’s Mike Ferris and Army Wives’ John Pogue. 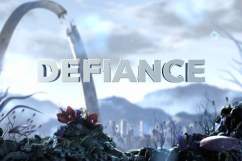