Reebok holds our partners to a high standard, and we expect them to live up to the values of our brand. Unfortunately, Rick Ross has failed to do so. While we do not believe that Rick Ross condones sexual assault, we are very disappointed he has yet to display an understanding of the seriousness of this issue or an appropriate level of remorse, at this time, it is in everyone’s best interest for Reebok to end its partnership with Mr. Ross.

Ross isn’t taking the news too bad he tweeted the link for this song after the news of his firing broke:

1. He Rapped About Date Rape

Ross’ firing is linked to Ross’s lines in Rocko song, U.O.E.N.O, in which he raps:

Ross made a poor attempt at trying to explain the lyrics to New Orleans radio station Q93.3:

A petition was set up at change.org demanding that Ross apologize. It reads:

Publicly apologize for glorifying ‘date rape’. It is scary and offensive that you can normalize this in a song and you’re a much better artist than that. We respect your freedom of expression, but at the same time we are exercising our freedom of speech in expressing our disappointment at your choice of lyrics.

You are influential. People will listen to your songs and try to live how you live. Yes, even adults are impressionable. Please denounce this blatant promotion of drugging and rape. It has happened too often and to too many people, even people we know to be seen as acceptable.

3. He Was Only With Reebok for a Year

Ross has been signed with Reebok since March 2012. Most of Ross’s links on the Reebok homepage now redirect to another part of their site.

4. Ross’s Lines Will Be Omitted From the Song

Rocko has since said that he will be taking Ross’s line out of future releases of the song, he says

The record with Ross will always be the original record, but because of the type of traction that the record has…it puts me in a position where I have to change it.

5. It’s Been a Rough Couple of Months for Ross 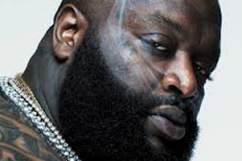 Rapper Rick Ross Crashes Rolls Royce after Being Shot At

In January, Ross was the target of an assassination attempt when a gunman opened fire on the rapper as he drove his car through Fort Lauderdale. Ross was driving in his car with his girlfriend Shateria L. Moragne-el at the time.

Hahaha fat boy hit the building?lol it looks staged to me. No hole’s in da car instagr.am/p/VCHWuPML2G/