Kelly Oxford is taking over the entertainment world from behind her keyboard. Her sharp wit and storytelling are getting her to high places in Hollywood. But before absolutely everyone is talking about the writer, here’s what you need to know.

1. She’s Been Developing her Online Presences Since 1994.

Oxford has been writing for whatever audience she could find for years. She almost instantly realized that the internet was a place where she could try out new material. She started a blog in 2002, as a personal writing exercise. Blogging anonymously she relayed short stories and interesting things that happened to her to anyone who would read it. Kelly Oxford started to publish using her name once MySpace grew in popularity and artists were using it as a way to reach out to fans. She soon garnered thousands of readers who eagerly anticipated getting an email notification that Oxford had published a new post.

Oxford expanded her web presence and challenged herself creatively by joining the micro-blogging platform. Twitter and Oxford turned out to be a match made in heaven, and by the summer of 2009 she had comedians following her and by the next spring she had many in the entertainment industry following her. In 2010 she was invited to participate in A Night of 140 Tweets, a celebrity tweet-a-thon and fundraiser for Haiti. Oxford was the only one invited who wasn’t a comedian, actor, or working writer.

Sometimes it feels like people who love Jesus forget he was a liberal Jew who hung out with a bunch of bros & a whore & gave people wine.

Cee-Lo laid the egg that Lady Gaga came out of.

Web MD is like a Choose Your Own Adventure book where the ending is always cancer.

The likes of Jimmy Kimmel, Jessica Alba, and John Mayer have been fans of Oxford, and their retweets helped contribute to her massive following. One of her first supporters was the late Roger Ebert, who Oxford credits as the first American to petition for her visa.

A native of Edmonton, she lived most recently in Calgary with her family. This would be why she required a visa to work in the US.

Her children were early fodder for her blog. After observing other mom-bloggers, she opted to put a funny and dark/realistic twist on motherhood in her writing. Her Tumblr nowadays has frequent posts of word-for-word dialog from the mouths of her three babes. 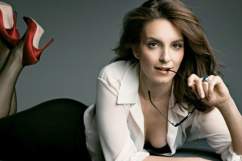 5 Funny Women Who Could Take Over ‘Late Night’

6. She and her Family Recently Relocated to Los Angeles for her Career.

To go even further with her writing, Kelly Oxford and her family moved to Hollywood. Specifically, she moved into Gary Oldman’s old house. Here she is on Jimmy Kimmel Live, asking Jimmy to give Gary Oldman his mail.

7. Her Book, Everything is Perfect When You’re a Liar, was Released Earlier this Month.

The book features essays and anecdotes from her life, all told through her signature impossibly witty penmanship. She’s led an exciting life full of humorous misadventures, such as the trip she took as a teenager to Los Angeles to find Leonardo DiCaprio and make him her boyfriend. She rationalized that if she ever wanted a shot with Leo, she would have to do it before Titanic came out, because by that point he would be too famous to be interested in her.

9. She Sold Pilot Scripts to CBS and NBC.

Twitter got Oxford the attention of Jhoni Marchinko, a television writer best known for Will and Grace, who offered to mentor her as she wrote an orginal television pilot. The script was inspired by her real life as a suburban mom in Canada, and was sold to CBS. The Mother of All Something is a project that CBS ultimately did not pick up. NBC struck a development deal with her for another show, one about a couple getting a divorce, in December of 2011. However, NBC decided to pass on the show, as well.

8. Her Screenplay Son of a Bitch Sold to Warner Bros.

Rejection from NBC prompted her to write a feature length script called Son of a Bitch. The story follows a young stoner who tries to maintain a partying image after learning she’s pregnant.

10. Don’t Call her an Over-Night Success.

Oxford’s recent meteoric rise may be mistaken for “easy,” but she insists that she did not take any short-cuts. In one blog post, she fires back at the haters who claim she hasn’t paid her dues. “The message I am getting from this is that living my whole life as a writer, writing for years and years meant nothing,” she says. Just like most over-night success stories, Kelly Oxford’s is years in the making.

Read More
Books, Canada, Movies, Television, Top 10, Twitter
This is what's behind her sharp Tweets and half a million followers.