May 4th is the day. The day that Netflix releases Season 4 of Arrested Development. Will Netflix crash that day because of the obvious overload it will obtain as millions of fans swoop to their TV’s and watch 7 hours of glorious television in one sitting? Let’s hope not. I can’t begin to tell you how excited I am for that day. In preparation and to pass the time until then, here are some fun Easter eggs you may not have known about from this landmark of a show.

In “The Ocean Walker,” Buster is dancing to Styx’s “Mr. Roboto” while sitting in the staircar and he accidentally sinks his hook into the dashboard. This is an homage to a Volkswagen commercial Tony Hale did in 1999.

2. Lucille’s housekeeper Lupe is always wearing the Bluths’ old holiday clothing that is two holidays behind.


In “In God We Trust,” she wears a “BOO!” sweatshirt during a Christmas party. In “Marta Complex,” she wears a “Gobble Gobble” sweatshirt on Valentine’s Day. In “The Cabin Show,” there’s a flashback to 1994 in which she’s wearing a Bush/Quayle sweatshirt.


The gag about Maeby’s alter ego Surely’s name being a play on her own name is a pretty obvious one, but another of George-Michael’s love interests, his ethics teacher Miss Barely (Heather Graham), also has a name that plays off of Maeby’s.


There’s a running joke throughout the show involving surveillance teams that use the conspicuous name “Blendin” on the vans for their fake businesses. In “Shock and Aww,” it’s “Blendin Mobile Pet Grooming.” In “Staff Infection,” it’s “Blendin Electric Company.” In “The One Where They Build a House,” it’s “Blendin Moving and Storage.” In “Mr. F.,” it’s “Blendin Catering.”

5. The Man Inside Me


There’s a shot of an Amazon.com-esque page for Tobias’s book The Man Inside Me in “Let ‘Em Eat Cake.” There are several other books and videos listed from other episodes. There’s also an LGBT diet book that Barry Zuckerkorn seemed to have written under the name B.J. Zuckerkorn.


In “Good Grief,” there’s a shot of the yellow pages, with the character Ice’s ads for his bounty hunter business and party planner business. There’s also an ad for Gene Parmesan off to the side.


In “Afternoon Delight,” this image of a turtle appears on the packaging of Oscar’s marijuana, possibly foreshadowing the death of Buster’s turtle from eating Oscar’s marijuana one season later in “Prison Break-In.”


Also “Afternoon Delight,” there’s a moment where GOB is in the middle of talking, saying, “-king 63 hundred dollar suit. Come on!” Later in the episode, there’s a flashback to the first part of GOB’s sentence, in which he says, “No, Al. I want to spill booze all over my fu…” GOB’s expletive got through uncensored, it was just split in half.


In “Family Ties,” a picture of Arnold Schwarzenegger, then the Governor of California, appears on George Michael and Maeby’s marriage certificate. 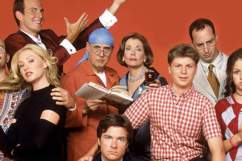