A new bill that Tennessee lawmakers are considering approval has country singer Carrie Underwood enraged on Twitter. If passed, the “ag gag” bill would require people to turn over to authorities undercover video footage of animal farms within 48 hours, reports the Epoch Times.

In an attempt to spread the word, Carrie Underwood turned to Twitter to express her anger.

Shame on TN lawmakers for passing the Ag Gag bill. If Gov. Bill Haslam signs this, he needs to expect me at his front door. Who’s with me?

Around a dozen states have passed or are proposing legislation banning undercover footage or video of farms. Animal activists say the bill poses a threat to investigations into animal cruelty on farms, and could also be detrimental to food safety, labor issues, and First Amendment rights.

While some stand behind Underwood in her protest against the bill, others think that she should shut her mouth when it comes to politics. Rep. Andy Holt says she should “stick to singing.”

“I would say that Carrie Underwood will stick to singing, I’ll stick to lawmaking,” Holt said.

I should stick to singing? Wow…sorry, I’m just a tax paying citizen concerned for the safety of my family. #NoAgGag wsmv.com/story/22027811… 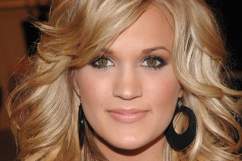