Hey misses, shut-up! Who ever you are shut up, shut up, shut up. Now listen, when a man is talking do not interrupt … stop it you sound like one of them dreadful loud birds I don’t like … You’ve gotta learn what manners and respect is; I’m Johnny “fucking” Rotten and I’m telling you a truth.

The Sex Pistols singer is in Australia touring with his other band, Public Image Limited, whose tour opened tonight with Rotten telling the crowd in Brisbane:

Hello, Brisbane. My name is John. I can talk to anyone except Australian TV presenters. What a pack of cunts?

Exactly why Rotten thinks he has the right to talk to people in that manner is unclear, what is clear is that Rotten, whose real name is John Lydon, has gone from punk anti-establishment icon to old right-wing gas bag in the last few years. 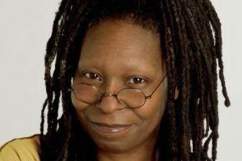 Whoopi Goldberg: Men Who Like Hairless Vaginas Are Basically Pedophiles

I am the enemies of governments and institutions, certainly not women. I’ve been married to one for 30 years. We love each other.

Rotten used to be cool.