Attorney Richard Hutton, who is handling all of Amanda Bynes‘ legal troubles on the West Coast, recently addressed accusations that his client is crazy or a mess outside of a hearing on Wednesday. Hutton tells People:

I think [reports] are way exaggerated.

In addition, he let the media outlet know his thoughts on Bynes’ condition, keeping his comments very professional and “PG.”

I think Amanda’s fine. I have no problems with her whatsoever. She’s a fine client.

He also states that:

Every time I’ve talked to her, I’ve had nice, attorney-client normal relations with her.

And, although Hutton is not handling her New York City arrest, he has his own thoughts on that situation as well. He stated that he believes it “has been blown out of proportion.”

As far as the latest news in regards to Bynes’ DUI case, attorney Hutton is negotiating a plea deal for her.

In terms of her New York case, we will keep you posted. For now, have a look at some footage of the star on the night of her arrest, in the courtroom, and a little look at her journey from stardom to now via KTLA5. 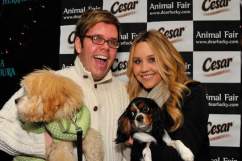