American Idol’s 12th season wrapped up on Thursday night as it was announced that finalist Candice Glover was chosen as America’s next “American Idol.” Here’s what you need to know about the latest winner.

Soul singer Candice Glover won the coveted title of American Idol over runner-up Kree Harrison. Harrison is a country girl from Texas and has been singing since the age of 3. At age 9, she won “Artist of the Year” by Kirbyville Playhouse and a year later she sang on the Rosie O’Donnell Show. Her singing career has taken her to multiple awards, a publishing deal and singing sessions with songwriters such as Trey Bruce and artist Rebecca Lynn Howard.

2. Glover’s the Fifth Female to Win

The winner joins the ranks of Kelly Clarkson, Carrie Underwood, Fantasia and Jordan Sparks as the fifth female to win on the show’s 12 seasons.

3. She Auditioned for American Idol Twice Before

Glover is no amateur American Idol contestant. This season is the singer’s third time on the competition show having been cut during season nine’s final 70 round and making it to the top 40 in Las Vegas on season 11. Glover’s parents did not want her to audition anymore, but she vowed that this time would be her last.

“Three years, persistence, determination and a lot of talent,” host Ryan Seacrest said upon accepting her title. “You deserve it.”

The 23-year-old was born in Beaufort, South Carolina to John and Carole Glover and graduated from Beaufort High School in 2008.

5. The Singer is the Oldest of Seven Siblings

6. She Has Struggled With Insecurity Issues in the Past

Candice has said that before American Idol, she was a very insecure person. In an interview, the winner said she has struggled with her weight and has had to have counseling in high school to help her with her insecurity issues.

7. She Wants to Be a Guidance Counselor

Glover has said that after American Idol, she wants to be a guidance counselor so that she can help girls in high school get through what she went through as a young adult.

8. The American Idol Winner is an Inspiration to Girls

Judge Nicki Minaj broke down in tears after Glover’s performance of “Next To Me” by Emile Sande, praising her for her humble personality. During her time on American Idol, girls from all over the country have tweeted the singer saying that she is an inspiration to girls everywhere.

9. Her Favorite Singer is Jazmine Sullivan

10. She Gets a $1 Million Recording Contract 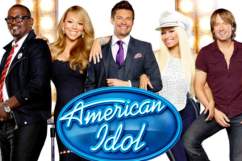