The stars of Pain and Gain are looking to team up once again. Dwayne Johnson and Mark Wahlberg will be flexing their muscles for an HBO drama/comedy pilot show. Color us intrigued.

The Hollywood Reporter reported on the big names attached to this upcoming TV project:

The untitled Miami athletes project hails from Stephen Levinson (Entourage), who will pen the script and executive produce alongside Mark Wahlberg, Johnson, Dany Garcia and Peter Berg, the latter of whom will direct the pilot. A search is under way for a showrunner, with HBO looking to film the pilot in the fall.

Dwayne Johnson is taking a break from the wrestling ring to do some more small screen work this year.

Starting this June, Dwayne will be the host of TNT’s new reality show series The Hero. The synopsis centers around 10 people who live together and take on tests that push their brain power and brawn to the limit. 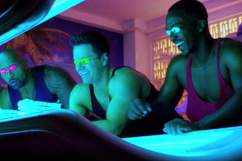 ‘Pain And Gain’ Trailer: The Rock And Mark Wahlberg Beef Up