Lindsay Lohan has been cut off from her Adderall prescription by The Betty Ford Center, where she’s been in rehab for the last week, but the troubled actress is intent on getting her drugs back–even if it means leaving, reports TMZ.

Lohan was originally allowed to keep taking adderall while at the rehab center because she claims she suffers from ADHD (attention deficit hyperactivity disorder), but after an evaluation, doctors say she doesn’t need it. Adderall is a prescription drug commonly abused for its ability to focus attention and especially as a way to suppress appetite. But The Betty Ford Center says they almost never prescribe the addictive drug to anyone over the age of 15. 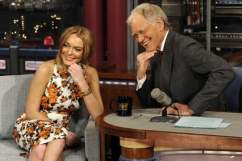 Now that Linsday is getting her prescription revoked, she’s hell bent on breaking out of the facility. The starlet is telling her friends that she absolutely cannot stay at Betty Ford and wants to be moved to a facility that will give her pills back.