Machete was a blood bath of modern grindhouse that was spawned from a parody trailer from Robert Rodriguez’s 2007 horror flick Planet Terror. The movie made no apologies about being over the top, had more big names than any film should, and fans ate up every celluloid minute of it. 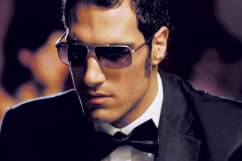 The first trailer for the sequel, Machete Kills, looks just as nuts and with even more celebrity big names answering the call of director Robert Rodriguez. The movie’s got Charlie Sheen as the president and Sofia Vergara wearing a machine gun bra – what other film this year is going to deliver that kind of insanity?! Look for Machete’s second vigilante rampage to begin September 13th.

We want to know what movies you’re excited about seeing this summer.
[poll id=”88″]