Jackson and Bubbles in better times.

Michael Jackson’s chimp — Bubbles — went from riches to rags after his pop-king owner died. But the previously pampered monkey has used his artistic talents to get by after the Jackson family turned their backs on him. The 27-year-old primate painted two colorful abstracts which raised about $3,000 toward his nearly $20,000 annual care bill, reports The Daily Mirror in the UK.

Bubbles is aging in the Center for Great Apes in Florida. He remembers his heyday by listening to the records that made him famous while his carers try to fund his expensive stay. The auctioning of his paintings is just another strategy to pay for Bubbles’ bills.

Patti Ragan, who works for the center, has asked for Jackson fans to donate yearly for Bubbles’ upkeep as he could potentially live to be about 60. Fan Scott Ponoroff, who donated money to Bubbles, told Digitalspy:

It’s a disgrace. If Michael’s own brothers and sisters aren’t giving money then I guess it’s up to the fans.

After Bubbles was saved by Michael Jackson from a Texas animal testing laboratory, he became one of the family and was said to have lived in a cot beside the Thriller star’s bed. According to Michael’s sister La Toya, Bubbles even ate at the family dining table. And much like Jackson’s other children — Prince, Paris and Blanket — Bubbles has quite a colorful name.

Now, according to the Mirror, the Jackson family hasn’t donated anything to his upkeep in Wauchula, Florida, since Michael’s death in 2009.

This isn’t Bubbles’ first encounter with art. The iconic American artist Jeff Koons made this kitchy statue titled “Michael Jackson and Bubbles” in 1988. 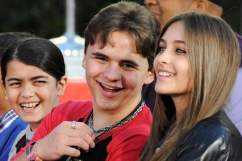