There’s super, there’s super duper, and then there’s “OMG, I COULDNT’E EVEN PUT THAT ON MY WALL!”

That third reaction is how we felt about the latest movie poster for Guillermo Del Toro’s soon to be released robots vs. monster epic, Pacific Rim. It turns out that poster is waaaaaaaaaaaaaaaaay huger and a lot more grand than your average movie banner. It’s just a bit too grand for Heavy.com’s page, so we’re gonna throw you a link to the super banner.

Be warned – this thing will take a couple of minuted to fully comprehend. But you’ll definitely want to see this film after you get a look at the biggest movie banner you’ve ever laid your eyes on. Feast your eyes on the technological greatness that will hit theaters on July 12, 2013.

The scroll button on your mouse will be abused…greatly.

To continue the hype behind Pacific Rim, a new “Moments Worth Paying For” trailer was also released. Get another look at these giant fighting robots above. 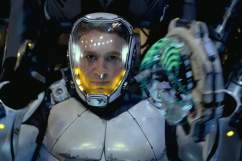