UPDATE: Dawn of the Planet of the Apes official release date is now slated for July 2014!

That first pic you just gazed at is the first official on-screen picture for the 2014 film, Dawn of the Planet of the Apes. The director of the film, Matt Reeves, tweeted out the pic from the set of the movie. The dude in the performance capture suit riding his horse to victory is Andy Serkis, who’s set to reprise his role as everyone’s favorite talking ape, Caeser.

Jason Clarke and Keri Russell are reported to be playing human parts in the film alongside Andy Serkis.

IGN provided an official description of the upcoming film, which is hitting theaters on May 23, 2014:

A growing nation of genetically evolved apes led by Caesar is threatened by a band of human survivors of the devastating virus unleashed a decade earlier. They reach a fragile peace, but it proves short-lived, as both sides are brought to the brink of a war that will determine who will emerge as Earth’s dominant species.

As for you Anchorman: The Legend Continues followers out there, a few pics of Kanye West filming his scenes have already been leaked. Hollywood.com posted the images seen above, as well as a description of the scene:

West was spotted filming scenes on a downtown Atlanta rooftop with returning stars Christina Applegate and Paul Rudd, a source on site tells Hollywood.com. Says our witness, “he was quite afraid of heights and required an umbrella for shade most of the time he was on the roof.”

Anchorman: The Legend Continues is hitting theaters on December 20, 2013. For this sequel, the filming is moving from San Diego to New York. 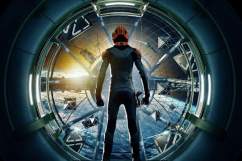