Here is the brilliant video of Will Smith, along with his wantaway son, Jaden, doing the iconic rap theme to The Fresh Prince of Bel-Air on The Graham Norton Show on the BBC.

If the father/son duo wasn’t enough for you, check out who else joins Will during his performance!

After busting some rhymes, Smith first introduces his legendary collaborator DJ Jazzy Jeff to help him out. Then the music breaks and the “Fresh Prince’s” co-star, Alfonso Riberio, who played Carlton Banks on the show, arrives to perform his famous dance routines.

This is the second time this week that Smith has rapped on a chat show. He broke into his classic “Summertime” while being introduced on the Letterman show on Monday, May 20. 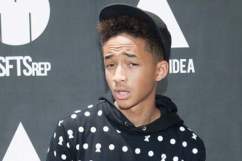 The performance is so good that the other guests can’t help themselves: Oscar nominee Bradley Cooper is grinning from ear-to-ear, whilst Heather Graham is rocking out.

In 2012 Smith performed the same rap on Norton’s show — yielding a clip that racked up 8 million YouTube views — so you can understand why he needed to jazz it up a bit more this time around.