Who should be the first to have a one-on-one smooch fest with Desiree? #TheBachelorette

Rap video with Soulja Boy, baby. This should have the right amount of cheese. 8:01pm

WOW – all ready for #thebachelorette tonight!!! Looks like all our favorite “Ben” is the Tierra of this season!!! Oh dear lord

I say @deshartsock should forget the men and pick the car! #TheBachelorette

And Brooks gets the first kiss… didn’t think he was attractive ’til right now. 8:15pm

Andy Grammar…. not a bad private performance for a date. 8:27pm

Soulja Boy’s laugh is like a little girl. 8:35pm

Hello, Cheeks!…. Brandon should sell his thong on ebay. 8:36pm

Put on me pants please… especially with all that bending over. 8:40pm

“It’s nice to see that looks and personality can combine.” #TheBachelorette twitter.com/BacheloretteAB…

Is Ben here for the right reasons? #TheBachelorette

I feel like Bryden’s going to get sent home. 9:00pm

OMG. the fact Brandon practically raised his whole family. I like him too. OMG I love everyone. #TheBachelorette

Des hangs out more with the Bentley than the guys… 9:09pm

Man, they are making sure Bentley gets their money’s worth this season. Because us viewers can afford Bentleys. #TheBachelorette

Let’s be real here. The hottest guy on #thebachelorette was Channing Tatum during the commercials.

Does every guy on this show have a heart-breaking story? 9:20pm

So awkward. How many times can you say the date is awesome and fun? 9:24pm

Can’t blame a girl for knowing what she wants @deshartsock #TheBachelorette “Just kiss me already!”

You know what makes fun days more fun? Talking about how much fun they were? #TheBachelorette

Aw, shout out to those dealing with diabetes. 9:30pm

I bet all the guys on #TheBachelorette have really pretty vaginas.

All the guys are crying inside, as dress shirts don’t come in V-neck #TheBachelorette

so i have already wasted 2 hours of my life on #thebachelorette. what’s another hour for #mistresses?

If you had talked to her more, she would have been asleep. 9:46pm

Brandon is ready to explode. Give it to him! 9:56pm 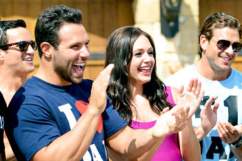