Chris Brown cannot seem to keep his hands off the ladies. After a favorable night for the star at Anaheim hot spot Heat Ultra Lounge Nightclub, the night ended with a bang … Well, more like a giant shove.

The singer had just performed and was having a great time, where a fan actually threw her panties at him. Not a bad night. Well, maybe not for Brown, but it definitely was for Deanna Gines. Gines told TMZ that she was hanging out in the VIP section with Chris. As the bar was closing, Brown shoved Gines to her knees. Gines told TMZ that the shove was deliberate and that she may need surgery. She also sent them an image of her on crutches.

Many are not surprised that the singer may have another assault under his belt.

Gines is said to have made a police report against the star over the incident. TMZ reports:

Deanna tells us she filed a police report, and a rep for the Anaheim PD says a female did indeed file a report for assault inside the club, but the rep won’t disclose the name. Cops are investigating.

If you think Deanna Gines is telling the truth, share it! 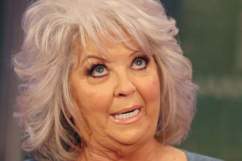