Dumb and Dumber To has been in development for for years, but a few bumps in the road has slowed down the process. After being dumped by Warner Bros., Columbia Pictures stepped in and picked it back up. Filming is expected to start this summer and the sequel to the classic movie will bring back the stars, Jeff Daniels and Jim Carrey.

“We’re middle-aged and still that stupid. Our IQ has not gone up one point combined,” Jeff Daniels told The Associated Press on Wednesday. “So it’s a frightening thing. You’re gonna see the two of us standing there trying to put thoughts together and you want to put underneath, ‘Kids don’t do this at home.’ It’s that stupid.”

The original movie followed the antics of the idiotic friends Lloyd and Harry–played by Carrey and Daniels–as they traveled cross-country to Aspen, Colorado. The movie grossed $127 million in the United States and helped jump start Jim Carrey’s career. 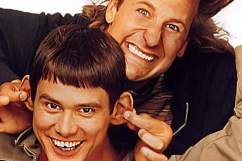