Ever since Miley Cyrus and Justin Bieber were spotted flirting at Breacher’s Madhouse on Sunday and allegedly spent private time together afterwards, suspicions of dating have escalated. But, we can’t really be sure of anything unless the pair confirms their lovey-dovey status themselves (that might be a tough one). Miley and Justin have been friends for a long time now, so we could easily mistake their intimate friendship for something a little more… juicy. We wouldn’t want any false alarms like their have been in the past.

What do you think? Is “Jiley” taking things to the next level? Check out our top ten list of reasons why we think they might be! Find out if these are dead giveaways or just tricks of the mind…

Wetpaint.com reports seeing Justin leaving Miley’s home in L.A. on Saturday. Sure enough, his leopard-printed Audi R8 was spotted by paparazzi and he was none other than caught red-handed. Looks like Justin and Miley have been doing a lot of one on one recently.

2. They Have The Same Hair!

If Miley Cyrus and Justin Bieber start dating we won’t be able to tell them apart. twitter.com/SimonsStephani…

Did someone give Justin and Miley the number to the same hairstylist?

Are @mileycyrus and @justinbieber dating? For sure they’re sharing a jar of hair schmutz. inquisitr.com/wp-content/upl…

Is it just me or do Justin and Miley look one and the same from behind? Judging by Miley’s new blonde doo and Justin’s well, typical ‘Bieber’ hair, the two can hardly be told apart. Like they always say, great minds think alike. Apparently they also attract since Justin and Miley subconsciously chose the same hairstyle!

3. Things Have Been Looking Rough For Miley And Liam

After multiple sources told US Weekly that the engagement between Miley and Liam Hemsworth was off, things have been uneasy between the two. One source told reporters:

They are definitely over… Miley doesn’t have time for Liam.

Given the news came out just a few weeks ago, it’s hard to tell if Miley is ready to move on. However, from the looks of it hanging out with Justin is sure speeding up her healing process.

But why stop now when things are looking good?

Remember when Justin hangs out with Miley and ellen aks if they are dating…so cute JILEY MOMENT bing.com/videos/browse?…:

Even Ellen Degeneres is curious about the flirty status between Justin and Miley. If the two are only close friends then that’s understandable. It’s great to have someone to hang out with, especially after a rocky end to a longterm relationship. But being close friends means spending a lot of time together… and spending a lot of time together leads to who knows what else? Well, they certainly do.

Tell your friends all about this!

5. Justin and Selena Just Broke Up, Too

so i’ve printed some pics like this one of justin and selena, and i want to put them on my wall saying ‘believe’ twitter.com/justinsselly/s…

These two lovebirds had a good run!

Huge news @selenagomez and @justinbieber never getting back together youtube.com/watch?v=FqJo2d…

So, in other words he’s probably looking for some “southern hospitality” if you know what I mean. And what better place than in the familiar arms of a close friend? After Eonline.com confirmed the “done-zo” relationship status between Selena and Justin once again last month, it’s clear that the two of them have moved on… perhaps to bigger and better. Is Miley now moving in on Selena’s territory? Cheers to sloppy-seconds!

6. They Left a Nightclub Together

Whether the two stars left the club together or simply walked out together is unclear, but a source later reported Miley and Justin spending more time together later that night. We don’t know what these kids were up to, but our fingers are crossed!

7. They Got Dinner Together

On Sunday (09), Justin Bieber and Miley Cyrus went out together, went to Beacher’s Madhouse at the Roosevelt Hotel. twitter.com/RebecaKariny/s…

After Justin and Miley spent some time flirting at Breacher’s Madhouse nightclub, some sources also told TMZ.com that the two caught a midnight dinner later on the same night. Just a platonic dinner or something more? Call us crazy but if that doesn’t scream ‘date’ then we don’t know what does! Come on ‘Jiley’, don’t let our hopes down!

8.There’s Racy Pics Of Them All Over The Internet

My idols: MILEY CYRUS, JUSTIN BIEBER and maybe SELENA GOMEZ!! But here’s the pics of Miley and Justin!!<3 I love their! twitter.com/JessyCorn16/st…

Take a good look pics of Justin and Miley spreading all over Twitter and you’ll see what we mean! Some flirting here, some shoulder grabbing there… we’re just waiting for one of them to confirm a romance after all these years! We can’t wait to see where paparazzi will find them spending time together next.

9. They Both Have a Lot in Common

Above is a photo of the two at the 2013 Billboard Music Awards at MGM Grand Garden Arena. Miley is handing Justin an award for winning “Top Male Artist” and for gettin’ his “sing” on.

It would be totally natural to see Miley and Justin together. Not only have the two come up with the same hairstyles recently for crying out loud, but they’re both vocalists and have great style. No wonder they’re such great friends, they’re practically the same person!

10. They Recently Collaborated Together on Music

Are you prepared to hear what the creative pair has come up with? We are!

US Magazine confirmed that Miley Cyrus & Justin Bieber have collaborated and that it will come out later this year! twitter.com/freshcyrus/sta…

Word on the street is that Miley and Justin have been working together to create some new music. With Justin’s ever-changing style and Miley’s flare of attitude, we think something great will come of this. Miley also told E News:

I know pictures are flying around… You guys will have to wait and see. I’m the biggest at top secrets. I’ve had this single ‘We Can’t Stop’ ready for about a year, and I’ve had to keep my lips sealed and just not saying anything. So you’ll see.

We are so excited to see what they will come up with, even if it doesn’t end up with them dating! 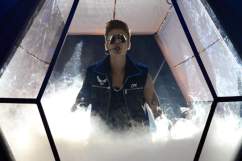 Read More
Celebrities, Justin Bieber, Miley Cyrus
Are Justin Bieber and Miley Cyrus dating? Check out the facts that might be a dead giveaway of their flirty new relationship.