In the new July issue of Vogue Magazine, Katy Perry opens up about her marriage to Russell Brand and how it actually ended. Some of the details are expected, while others are quite shocking. Plus, Perry talks about a deep dark secret regarding their relationship. Read on!

PopWatch reports that in the interview with Perry, she states:

Let’s just say I haven’t heard from him since he texted me saying he was divorcing me December 31, 2011 … one day after he formally filed for divorce.

Ouch. No wonder she was so devastated in the scenes shown in her movie Katy Perry: Part of Me. Certain moments in the movie led viewers to speculate that having children was a cause of the couple’s demise. Katy has a different theory.

At first when I met him he wanted an equal, and I think a lot of times strong men do want an equal, but then they get that equal and they’re like, I can’t handle the equalness.

Share this if you've ever been dumped via text message!

She also added that his humor was:

hysterical in some ways. Until he started making jokes about me and he didn’t know I was in the audience, because I had come to surprise him at one of his shows.

TheNews.com reports that in the interview, Katy reveals a controlling side of Brand.

He didn’t like the atmosphere of me being the boss on tour. So that was really hurtful, and it was very controlling, which was upsetting.

Apparently, there is also a deep dark secret about their divorce that Katy won’t reveal just yet.

. @KatyPerry opens up abt her divorce from @rustyrockets & reveals a shocking detail. Find out more in #HotTopics http://t.co/WiaJjqVoDZ

I felt a lot of responsibility for it ending, but then I found out the real truth, which I can’t necessarily disclose because I keep it locked in my safe for a rainy day.

Uh oh. What could the secret be? I guess we will have to wait until Katy is ready.

If you want to know Katy's secret, share it!

On an interesting note, unlike Brand, Perry seems to still have a thing for former flame John Mayer. In the same interview with Vogue, Perry notes:

I do have to figure out why I am attracted to these broken birds. 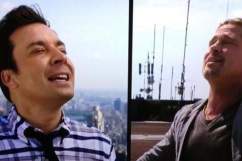 Read More
Celebrities, Katy Perry, Russell Brand, Wendy Williams
Katy Perry reveals the truth behind her divorce from Russell Brand in an interview with Vogue. The control issues, the jokes about her, and a deep dark secret.