When Kim Kardashian first got to the hospital, the fancy suite she had booked for herself was all ready taken … because she was 5 weeks early. In fact, all of the VIP suites were taken. Kim then had to be placed in another unit in the meantime.

So, who was occupying baby Kaidence’s first residence? TMZ reports that NBA star Dwight Howard was actually in one of the suites and caught up with Kanye West who was roaming around the halls.

When Kim Kardashian first arrived to Cedars Sinai to deliver her baby, she didn't get the fancy celebrity suite… http://t.co/V1EUb06MSS

Apparently, this is Howard’s fourth child. He has three others by all different baby mamas. Nonetheless, the guy was very excited. He and Kanye bonded at the hospital as Kanye gave him a preview of his new “Yeezus” album.

An update on Kim is that she has left the hospital and is “shacked up” in a private location somewhere with baby in tow. Stay tuned for more updates! 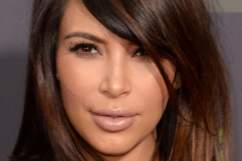 Kim Kardashian’s Cause for Dangerous Delivery: 5 Fast Facts You Need to Know