After being rushed to the hospital for popping Motrin and attempting to cut her arm with a meat cleaver, 15-year old Paris Jackson, daughter of Michael Jackson, received a shout out from goth rocker Marilyn Manson. What had apparently pushed the teen over the edge the same day as her suicide attempt was being told she couldn’t go to Marilyn’s concert. Having heard about this from TMZ News, Marilyn had a heartwarming reaction.

I hope you feel better. You will be on my guest list anytime you want.

He also dedicated a song to her:

Your friends would want to read this, so share it! 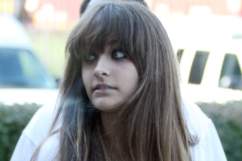