After Ryan Reynolds’ Nick Waller is killed in the line of duty, he is ‘resurrected’ to join the Rest in Peace Department a force of undead detectives who bring divine justice to demonic entities walking the Earth. Partnered with Jeff Bridges’ veteran officer Roy Pulsipher, the two make an unlikely duo as they send evil spirits into the afterlife.

In anticipation of RIPD’s release, here’s ten facts you need to know before seeing the film on July 19th.

Known primarily for his comedic roles, most recently of which was his portrayal of mentally unstable man-child Alan Garner in the Hangover 3, Zach Galifianakis is also an accomplished stand-up comedian and pianist, and has been a working entertainer for some time.

A turn as RIPD’s Roy Pulsipher would have been an interesting career move for Galifianakis, but alas, it was not to be, as scheduling conflicts forced the veteran comedian to drop the role, which instead went to Jeff Bridges. While Jeff Bridges doesn’t have the comedic chops of Galifianakis, he brings a clear presence to the role that may not have been evident in the Galifianakis interpretation of the character, and ultimately seemed to take the character in a very different direction than Galifianakis would have.

Ryan Reynolds has been a mainstay on the silver scene since his breakout role in the 2002 comedy National Lampoon’s Van Wilder as the titular Van Wilder. Since then, Reynolds has propelled his status as a leading man in both action films and comedies alike.

Reynolds turn as Nick Waller will be his fifth appearance in a comic boom movie. He has previously been featured in the Marvel Comics films Blade: Trinity and X-Men Origins: Wolverine as vampire supernatural detective (evidently, Reynolds is also no stranger to the world of supernatural detective work) Hannibal King, and fast-talking mercenary Deadpool respectively.

Clearly, Ryan Reynolds at least has a bit of an affinity for comic books. Otherwise he wouldn’t attach himself to so many adaptations!

3. The Movie Is Based Off The Comic Book Rest in Peace Department

While it should be clear by now that RIPD is a comic book adaptation, the comic in question that it is based off is called Rest in Peace Department and is a four issue mini series that was published by leading independent publisher Dark Horse in 2003.

The plot of the comic seems to closely follow the movie adaptation, and for fans of the comic, the RIPD film looks as though it will be quite faithful to the original source material. 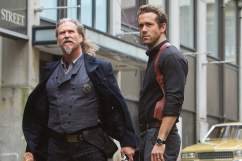 4. Atlus Is Publishing An RIPD Game

A Japanese game publisher primarily known for its Persona line of games and for the recent PS3 hit Catherine, Atlus is about the last video game publisher you’d expect to be touching a comic book movie adaptation.

A two-person Co-Op shooter, the RIPD game looks to be surprisingly refreshing, particularly for a video game adaptation, which notoriously have reputations for being quick cash-grabs. However, it’s great to see that the IP is being given some dignity with a proper video game tie-in, which won’t just rehash the events of the movie.

As well as the aforementioned Atlus video game tie-in, the movie also sports a single-player Facebook game tie-in, which functions as a simple platformer/shooter. Simply called Roy’s Revenge, the game allows players to control either Nick Waller or Roy Pulsipher as they battle their way through a variety of thugs, ghosts and other supernatural beings.

As has been the trend in recent years, Dark Horse Comics‘ film and television production wing Dark Horse Entertainment is directly involved with the film in a production capacity.

Dark Horse is known for taking a direct hand in adaptations of their intellectual proprieties, and have previously been involved in such notable films as Hellboy , Hellboy 2: The Golden Army, The Mask, and Son of the Mask.

7. The Set Decorator Won An Emmy on HBO’s John Adams

Set decorator is one of those film set jobs that most people just don’t seem to understand. Rather than just tell people what to buy for a set, the set decorator creates the look and feel of the universe in which a production inhabits, and in some cases, can truly add to the overall aesthetic of a movie or television show.

RIPD set decorator Kathy Lucas is no exception, as her Emmy award winning work on the HBO miniseries John Adams proves that set design really can really make all the difference.

Judging by the aesthetic of the RIPD film universe, Kathy Lucas seems to have done a fantastic job of bringing the visuals of the films set pieces to life. 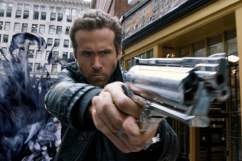 8. The Screenwriters Previously Wrote Clash of the Titans and Æon Flux

No strangers to comic book adaptations themselves, screenwriters Phil Hay and Matt Manfredi were given the difficult task of adapting a four issue comic book mini series into a 1 hour and 36 minute film. The writing duo is known for their work on Clash of the Titans and Æon Flux, as well as on the Jackie Chan vehicle The Tuxedo.

Big comic books fans themselves, the screenwriting duo of Phil Hay and Matt Manfredi heralded RIPD to the silver screen, and captured the feel of the comic book mini series to its big screen adaptation.

9.The Director Previously Worked On The Film Adaptation of RED

Judging by his previous outings, Schwentke has a real feel for gripping action and emotional turns, and will hopefully give a great performance in RIPD.

10. Jeff Bridges Wrote A Song For The Film

In addition to acting, Jeff Bridges is an accomplished country musician, with two studio albums under his belt. Working with accomplished song writer and music producer T-Bone Burnett, Jeff Bridges recorded a song called “The Better Man,” with lyrics written by Bridges himself, the screenwriters, the director and Burnett. The song is not yet available, but will be released with the film’s soundtrack, which will release three days before the film on July 16th and is currently avaialble for pre-order.