What a duo! Just this evening, punk rock Canadian princess Avril Lavigne and Nickelback frontman Chad Kroeger were scheduled to wed on a romantic getaway in the South of France. And, today marks the first day of their three-day marriage ceremony, according to Herald Sun.

The best part is, it’s Canada day! Wait a minute… what happened to Sum 41 hubby Deryck Whibley? It’s simple, really. US Magazine reports that Avril admittedly had other things in mind while she was dating Whibley… Chad being one of them!

If you're happy for the new married couple, pass this on!

Things went dry between Avril and Deryck back in 2010, after only four years of marriage. But, could the real reason the marriage ended between them be because Avril had eyes for Chad the whole time? It turns out — even though she was dating the Sum 41 star, Avril couldn’t forget about Chad after seeing him for the first time at the Roxy nightclub in Vancouver “more than a decade ago.” According to the magazine Avril even admitted it, saying:

Wild, right? I was 17, and ‘Complicated’ had just come out… He didn’t even know who I was at that point! I had just gotten on the radio.

Adorable coincidence, or fate for the punk rock princess? And, to make matters even better, the couple’s wedding song will be a song they wrote together! Either way, according to Perez Hilton Deryck more than got Avril back last Halloween when he and a friend reportedly dressed up as her and Chad for the night …”So much for Avril’s happy ending!”

Share this if you're happy Avril and Chad found each other! 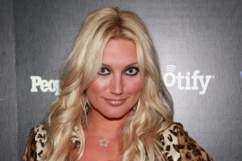 Hulk Hogan’s Daughter Instagrams Her Engagement to a ‘Cowboy’